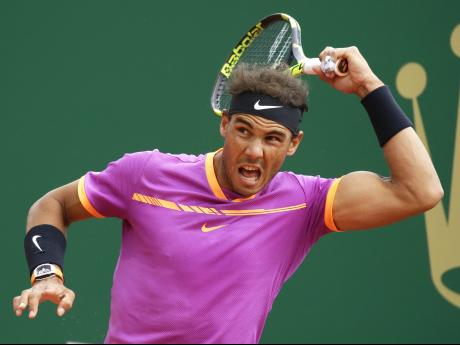 As the first men's tennis player in the Open era to win the same title 10 times, Rafael Nadal showed yesterday that he's likely the best ever on clay after easily beating Albert Ramos-Vinolas 6-1, 6-3 in an all-Spanish final at the Monte Carlo Masters.

It was Nadal's 50th career title on his favoured surface, moving him one clear of Argentine Guillermo Vilas. The next big challenge for Nadal will be winning a 10th French Open title. The last of his 14 Grand Slams was three years ago in Roland Garros.

"I want," Nadal said after yesterday's game, a smile breaking across his face. "I really want it too."

It was Nadal's 70th career title but the first of the season, having lost his previous three finals - two of those to Roger Federer.

The only final the 30-year-old Nadal has lost at Monte Carlo was to Novak Djokovic in 2013.

"Winning 10 times in such an important event like Monte Carlo is something difficult to describe," Nadal said. "My serve worked great. I have been hitting very well on backhand during the whole week. The forehand is better and better every day."

Ramos-Vinolas wasn't a threat to the defending champion.

Appearing in his first Masters final, the 15th-seeded Ramos-Vinolas saved three break points in his first service game and was 0-40 down in his next. Nadal served out the set in 30 minutes with an ace.

Nadal's 29th Masters title moves him one behind Djokovic's record. He will also have his sights set on a 10th title in Barcelona next week - Nadal's previous career title was there, almost one year ago.

Since then, Federer has beaten him in finals at the Australian Open and the Miami Masters, either side of a win for big-serving American Sam Querrey at Acapulco, Mexico. Federer also beat Nadal in the fourth round at Indian Wells.

"(This title) arrives in just the right moment, I believe," Nadal said. "Winning here is an important step forward for me."

Nadal's 70 titles are three better than Djokovic, who is a year younger. Nadal is fifth on the all-time list, but seven behind John McEnroe. Further ahead, the 35-year-old Federer has 91; Ivan Lendl 94 and Jimmy Connors is a long way away with 109.