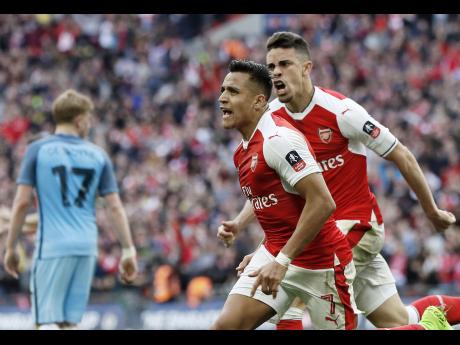 Alexis Sanchez ensured Arsenal's stormy season will end with an FA Cup final after securing a 2-1 victory over Manchester City in extra time at The Wembley Stadium yesterday.

The Chilean striker struck in the 101st minute to secure an all-London May 27 final against Chelsea. Arsenal are chasing a third title in four seasons in the competition that has provided a comfort blanket for Arsene Wenger during a 13-year Premier League trophy drought.

But with Arsenal languishing in seventh place in the Premier League, and set to miss out on the Champions League, the heat remains on the manager, whose contract expires at the end of the season.

"People can question my decisions but not loyalty and commitment to this club," Wenger said coyly about his managerial future after goals from defender Nacho Monreal and Sanchez gave him a shot at a seventh FA Cup triumph next month.

But Pep Guardiola's first season in charge of City will end without silverware and he even faces a fight for a Champions League spot. That's not what City were expecting when they hired the serial winner who had won titles in every campaign with Barcelona and Bayern Munich.

But Guardiola was outwitted by Wenger, who has adopted the three-man defence that has served the Premier League's top two teams, Chelsea and Tottenham, so well this season.

"Maybe we found in a period we needed a bit more security ... a bit more defensive stability," Wenger said.

Uncharacteristically, Arsenal's defence was holding up strongly, denying City space to threaten Petr Cech's goal; for an hour at least, until the Gunners were caught out by a ruthless counter-attack.

Aaron Ramsey conceded possession on the edge of the City penalty area as he dithered on the ball. Yaya TourÈ intercepted and quickly chipped the ball over the Arsenal defence to Sergio Ag¸ero. The Argentine raced past Rob Holding and Cech, who had been too slow off his line, watched helplessly as the ball was chipped over him into the net in the 62nd minute.

It was the striker's 14th goal in 15 FA Cup games, and a painful sight for Ramsey, who covered his face with his jersey as the City fans celebrated.

This wasn't one of those days Arsenal capitulated, instead drawing level in the 71st minute from an unlikely source. Alex Oxlade-Chamberlain crossed to the far post and Monreal demonstrated his ability by volleying past goalkeeper Claudio Bravo with his weaker right foot.

Monreal's third goal in four years at Arsenal came close to being wiped out. Only the woodwork spared Arsenal, with TourÈ's shot beating a diving Cech before hitting the post and Fernandinho heading onto the crossbar.

Having forced extra time, Arsenal displayed the resolve lacking so often this year to turn the semi-final around.

Sanchez came through for Arsenal in extra time, just as he did for the joint-record 12-time FA Cup winners in the 2015 semi-final, producing a winner in the 101st minute. Mesut ÷zil's free kick was headed down by Rob Holding, Danny Welbeck missed his attempt but Sanchez demonstrated his poacher's instinct to nudge the ball over the line.

"Our league form has not been good enough and, obviously, we are disappointed with how that's gone," Oxlade-Chamberlain said. "This was something we could hold on to for the fans. It was important we got to the final."