Windies on the attack against Pakistan 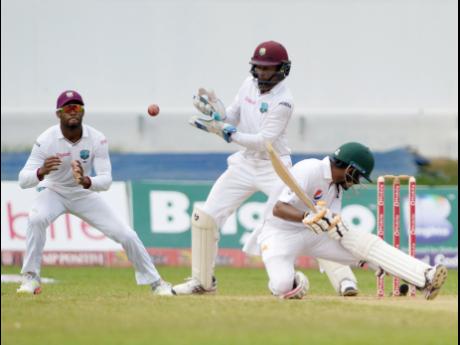 Ian Allen
Pakistan batsman Babar Azam attempts to play a shot but was deceived by a turning ball and was caught a first slip by Keiron Powell (left) on the third day of the first Test match between the West Indies and Pakistan at Sabina park on Sunday. Wicketkeeper Shane Dowrich looks on.

The West Indies assistant coach Roddy Estwick is looking forward to the arrival of the new ball to help the team in their quest to limit Pakistan below their first innings total, heading into today's fourth day of the first Brighto Paints Q Mobile Test at Sabina Park.

The duel, which is so far evenly poised, has Pakistan at 201 for four in response to the West Indies' competitive score of 286.

The trio, in bowling impressive spells during various stages of the match, has so far claimed two for 37, one for 35, and one for 40.

This is against Pakistan batsman Babar Azam, who has so far topscored with 72, and Younis Khan, who in becoming the first Pakistani to surpass 10,000 runs, scored 58.

"We are looking to get the six wickets in the first session and, if we can do that, then we can either have a lead or restrict them to as low a lead as possible. The pacers have done very well so far and we hope as well that the spinners will come into their own tomorrow.

"Also, the new ball is just two overs away so if we can strike early with some pressure, and we can expose the lower to bottom half of their batting,'' he added.

The West Indies, who were hoping to surpass the 300 runs landmark at the start of play, were denied by the outstanding Mohammad Amir, who in picking his sixth wicket bowled Gabriel for the addition of one run to his overnight four.

This left Holder, who at the time had gathered another two runs to his overnight score, on 55 not out. The 25-year-old Amir closed with six for 44 off 26 overs.

Buoyed by their decent first innings score, the West Indies then took that momentum unto the field and in a sprightly first stanza kept Pakistan in check with wickets at 23 for one, and 54 for two.

Pakistan was to, however, make a comeback with a 131 runs third wicket stand between Azam and Khan. The experienced Mishbah-ul-Haq and AsadShafiq, who are both not out on five, will resume batting today.

"It is not going to be easy getting their remaining wickets," outlined Estwicket. "It is going to be difficult as it's a good pitch and they still have to specialist batsmen at the crease, and the wicketkeeper to come as well.

"We will just have to continue to be disciplined and work hard as we did in the last session. We are looking to win the game, but if it ends in a draw we would be happy with that and then we would move to Barbados and see what happens."