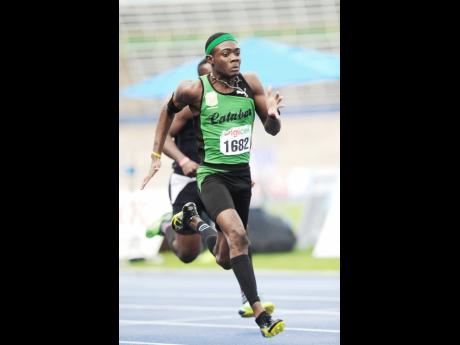 Calabar High School could become the most successful high school 4x400 metres team in the history of the Penn Relays this week. Led by the outstanding Christopher Taylor, Calabar will bid for a record eighth Penn 4x400 metres when the Relays begin on April 27. Calabar go into battle with the fastest time of all entrants.

Upset last year by Jamaica College, Calabar won at Boys and Girls' Championships in 3.8:76 seconds ahead of a strong STETHS team that also went under 3.10 at 3 .9..97 seconds.

The Calabar effort could have been faster as Taylor, who has run 45.41 for the flat 400m this season, cruised his anchor leg in 46.6 seconds. By contrast, the 2015 World Under 18 winner geared up to 45.1 seconds when he finished Jamaica's bronze medal run at last year's World Under-20 Championships.

Should they succeed, Calabar would break their seven-win tie with Bishop Loughlin High School from Brooklyn.

St Jago were third at Champs and will reassemble their fastest team after lending Anthony Cox to medley relay duty there.

A win for St Jago would bring the Monk Street school level with Calabar and Bishop Loughlin with seven Penn 4x400 victories.

However, the most likely upsetters are STETHS with the Champs Class One 800m 1-2 finishers Rayon Butler and Javauney James.