Hubert Lawrence | In any other country ... 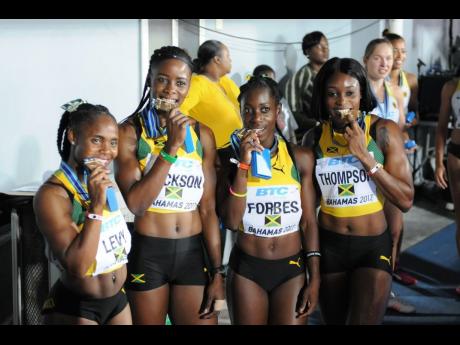 In any other country, there would be dancing in the streets if their ladies 4x200 metres relay team clocked one of the fastest times ever to win at the IAAF World Relays. Jura Levy, Shericka Jackson, Sashalee Forbes and Elaine Thompson would be the talk of the town. This, however, is Jamaica.

It doesn't seem to matter much that Jura, Shericka, Sasha and Elaine demolished the old Jamaica record set at the 2014 Penn Relays by a clear second with their sensational time of one minute 29.04 seconds. Neither does it matter that Jamaica is now the third-fastest country of all time. Given that the world record is held by the old East Germany at 1:28.15, Jamaica would be number two all time if the holders were rightly erased from track history because of East Germany's well-documented, state organised steroid use.

On another note, the official World Relay 4x200m splits promise much. Jackson, the World and Olympic 400 metre bronze medal winner, scurried through her leg in 21.9 seconds and Thompson's controlled outpouring of speed was a 21.7. These encouraging signs have passed all too quietly.

The focus seems to be on a rare baton drop by the men's 4x100m team and the impending retirement of the incomparable Usain Bolt. It was unfortunate, but as one sage reminded me, the winning time by the US - 38.42 seconds - wasn't too much faster than the 38.89 clocking by the G.C. Foster College to win the recent Inter-Collegiate Championships. For now, there isn't too much cause for alarm.

Funnily enough, Jamaica actually lost to the US at the last World Relays in a race that ended with Ryan Bailey's 'cut-throat' dub version of Bolt's 'To the World' sign. Later, in the same season at the 2015 World Championships, Nesta Carter, Asafa Powell, Nickel Ashmeade and Bolt won handily. That should comfort the nerves ruffled by the loss and the eye-opening speed of Canadian whizz Andre deGrasse.

The truth is that the 1.29.04 was the best performance of the World Relays. Moreover, it might end the World Relays-Penn Relays period as the supreme piece of sprinting. It was that good. In less windy conditions, the time would certainly have been under 1.29.

In the mourning over that dropped baton, we have managed to gloss over the form of Jura, Shericka, Sasha and double Olympic champion Elaine. All four have bright prospects for this World Championships year. In particular, Thompson looks set for a fine campaign.

The 4x100m men have proven to be a fast and safe relay unit. Their gold medals and world records, which still stretch all the way back to 2008, speak volumes, but the women are almost as good. In a way, the 1.29.04 may signal the arrival of parity. It might also mean that the brilliant women's 4x100 world record of 40.82 seconds might be within reach when super sprinter Shelly-Ann Fraser Pryce returns.

- Hubert Lawrence has made notes at tracksince 1980.