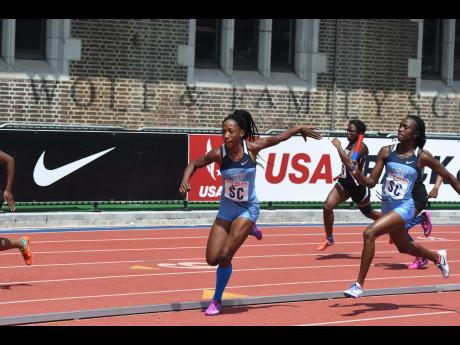 Edwin Allen High advanced to three track finals on yesterday’s opening day of the 123rd staging of the Penn Relays inside the Franklin Field Stadium.

Their 4x100 and 4x800 metres teams led the way. The sprint relay quartet of Kasheika Cameron, Patrice Moody, Shellece Clarke and Tamia Campbell sped to a fast 44.76 seconds to win the first heat easily. They were the only team to go under 45 seconds.

Hydel are the second-fastest qualifiers after winning their heat in 45.52 and will be joined by St Jago (45.93). Holmwood failed to advance. They were disqualified after their anchor runner, Shanette Allison, took the baton out of the exchange zone.

Edwin Allen was also the only team under nine minutes in the 4x800m. Kayann Green, Kara Grant, Nadine Rose and Cemore Donald, with a split of 2:11:39 on anchor, stopped the clock at 8:56:75.

Edwin Allen are also in the 4x400m final after winning their heat in 3:39:73. They are the third-fastest qualifiers. The defending champions will face their biggest test in this event as Hydel, Union Catholic, Holmwood, Vere and St Jago are expected to ensure a cracker of an event

Hydel are the fastest qualifiers going into the final after an impressive 3:37.70 to win their heat. They could make this their first win in a championship event at the meet.

Union Catholic of the United States will have Olympian Sydney McLaughlin on the anchor leg. She ran a sub-51-second leg to pilot her team to 3:38:35 and second fastest going into the final.