'Frog' Holmes turns on the power in Contender 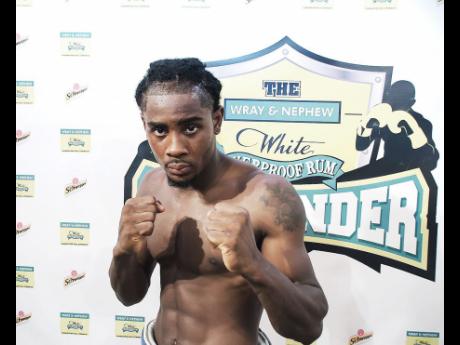 Richard ‘Frog’ Holmes, who was the runner-up in last year’s Wray & Nephew Contender competition, served notice on Wednesday night that he would, again, be a dangerous opponent this year.

Holmes scored a decisive technical knockout victory over Mike Breton of Canada at the Chinese Benevolent Association auditorium The end came after 29 seconds of the third round when Breton was floored for the second time in the contest.

Holmes stated that before the fight, he was in good condition and was looking for a decisive victory. Going up against an opponent with one win and three losses, he then delivered on his promise.

He built up his attack slowly in the first round, but as soon as he found his range, he unleashed a barrage of punches that shook Breton. The body was his target of choice, but he switched the attack to the head from time to time and established early domination. Breton fought back gamely in this round, but Holmes, who started the fight with a 13-6 record, never backed away from him.

On instructions from his corner, Holmes settled down in the next round and completely dominated it. Breton was put on the canvas with a combination of punches, and the writing was on the wall. A quick start in the third round saw Breton going down again and bleeding from his nostrils. Referee Eion Jardine quickly called a halt and asked the doctor to take a look at the Canadian. He worked for a few minutes to stop the bleeding and did so eventually.

Breton, through his trainer-interpreter Frank Duguay, conceded that he was outclassed by a hard-hitting opponent.

Duguay said afterwards: “The Jamaican hits hard and Mike did not have the power to match him. He is a tough fighter, but he will now have to make a decision as to whether he wants to continue professional boxing.”

There were two entertaining amateur bouts on the card. In the first, two of Jamaica’s best lightweights, Marvin Shea from the Jamaica Defence Force and Sanjay Williams from Bruising gym, clashed, and after three hard-fought rounds, Williams came away with a scintillating victory. In the second bout, Jamaica representative Ricardo Carter from Dream Sports gym overwhelmed Kenry McDermott from Bruising gym and won on points. McDermott suffered an eye injury and had to be treated after the fight.