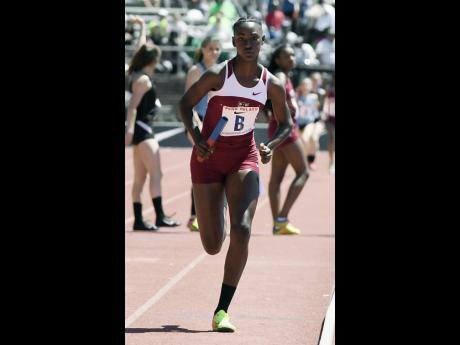 Collin Reid
Chrissani May leads Holmwood Technical victory in 8:48.15 in the high school girls' 4x800m at the Penn Relays in Pennsylvania yesterday. 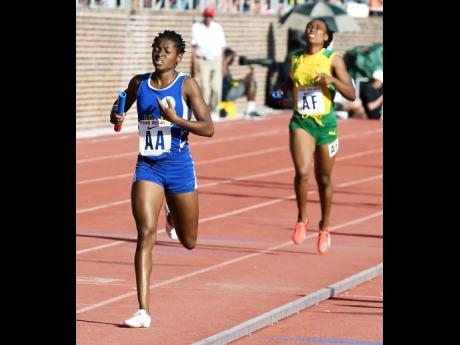 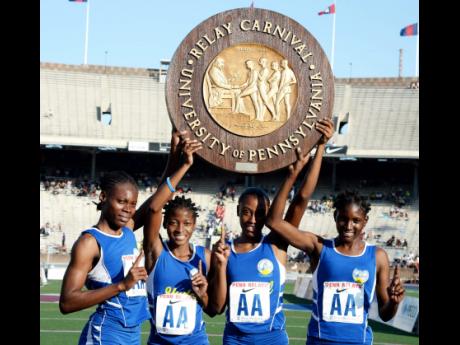 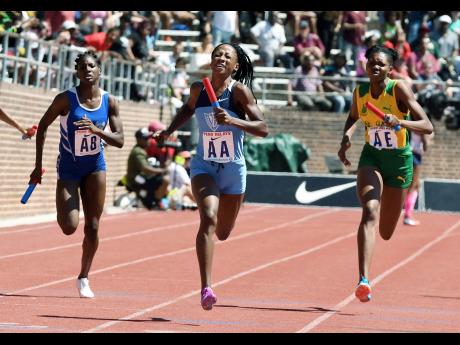 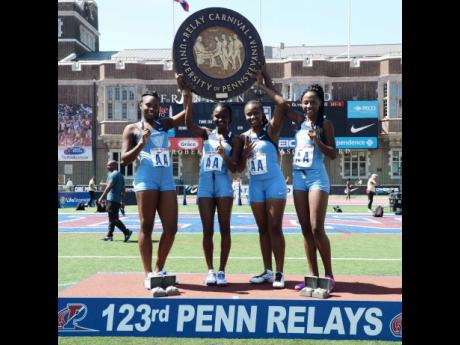 THE weather at this year's Penn Relays has been very good. It's almost like home and the conditions were perfect for Edwin Allen High's sprint relay quartet of Kasheika Cameron, Kevona Davis, Shellece Clarke and Patrice Moody.

The girls wrote their names in the record books with a superlative performance in the 4x100 metres becoming the first female high school team to go sub-44 seconds as they clocked 43.96 seconds to win the Championship of America sprint relay. The time erased Vere Technical's 2004 record of 44.32. Jamaican schools swept the top four spots as St Jago 44.53, Hydel 44.55 and St Catherine High 45.26 were second, third and fourth respectively.

After seeing their 4x800m team lose earlier to Holmwood Technical it was a pumped up Michael Dyke-coached quartet which turned up for the Championship of America 4x100m final and they delivered in style.

At the start it was St. Jago High's Kimone Shaw, running her best race of the season, who gave the former champions the slight edge but this was wiped out on the second leg by a brilliant Kevona Davis, who is competing at the Penn Relays for the first time. Davis ran one of the fastest ever second legs at this meet by a high school athlete as she clocked an amazing 10.47 seconds split to put her team in front. Despite gallant efforts from St Jago and Hydel the experience of Clarke and Moodie took Edwin Allen to a smashing win.

Coach Michael Dyke was not surprised by his team's record run and had high praise for young Davis.

"I am very elated and this victory is very special as with young Kevona in the team I had to take the chance and go for the win and the record because I know without her it would have been difficult to win because St Jago have an awesome team," said Dyke who stated that he had no regrets in running Davis. "I have no regrets although she could miss her final year of eligibility," said Dyke.

Hydel also shared the spotlight with Edwin Allen as the Corey Bennett-coached team also wrote their names in the record books in great style after removing Holmwood Technical's 16 years old 4X400 record of 3:34.75 to win the high school Championship of America event in 3:33.90.

It was an all the way victory for Hydel in their third year at the Relays as the quartet of Roneisha McGregor, Shian Salmon, Cherokee Young and Gabrielle Young put the icing on the cake for Jamaican teams with an amazing win.

Like they did in the 4x100m final St Jago gave it all they had but had to settle for second in an excellent 3:36.54. Olympian Sydney McLaughlin out of Union Catholic High in Maryland ran the fastest ever high school 400m relay split of 50.37 seconds taking her team from sixth to third in 3:38.94. Edwin Allen were fourth in 3:38.96, Holmwood Technical fifth in 3:39.39 and Vere Technical seventh in 3:41.99.

Hydel's Bennett was pleased with his team's historic win.

"Last year we failed to reach the final and we were disappointed but the girls went back and trained very hard and now it is history. We were confident all season that the team was going to win despite what people were saying after the preliminary round. The record wasn't our focus, we just wanted the win," said Bennett.