Money Magnet will use class to stay Oaks trip 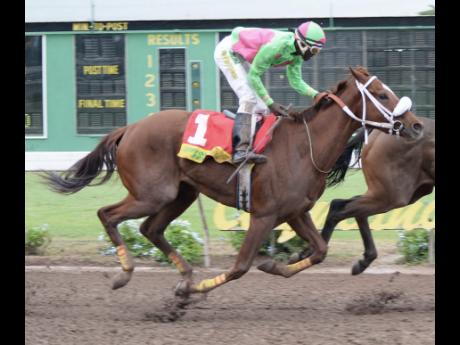 TRAINER Richard Azan yesterday said though MONEY MAGNET's lineage points to speed, he is convinced that she will use her class to stay this afternoon's Caribbean Choice Jamaica Oaks over 2000 metres.

Though bred to sprint, Azan's filly is a versatile winner of three races.

She has competed at distances ranging from five furlongs to a mile - at which she placed third behind SHE'S A MANEATER and BILINGUAL in the 1000 Guineas three weeks ago.

She is by Nuclear Wayne out of Jazzy Jet, whose sire is Al's River Cat, is a renowned speed stallion.

"Strange enough, Al's River Cat is out of River Man, who comes from a line of stayers. However, everything Al's River Cat has thrown in Jamaica are sprinters," Azan pointed out.

"However, when horses run among their peers, by virtue of class, they seem to do things they would not normally do in open company," he added.

"SAINT CECELIA, as a sprinter won the Oaks comfortably, she was running against her peers.

I believe it will be a competitive race.

"I would not be surprised if MONEY MAGNET runs a really good race, and I give her as good a chance as anybody."