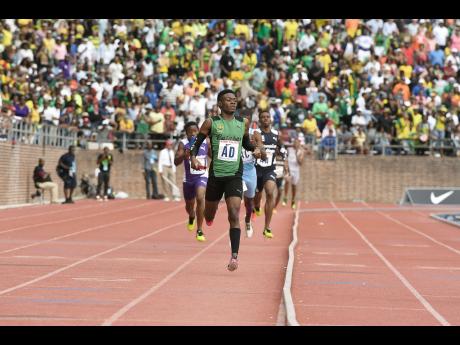 Calabar High were double winners on yesterday's final day of competition for high school teams at the 2017 Penn Relays.

The Red Hills Road-based school ended the meet in fine style after winning both the 4x100 and 4x400 metres Championship of America high school relays in record times.

Like the first two days of the meet, the weather was perfect and Calabar took full advantage of the situation as they smashed the 4x100m record, posting a new mark of 39.00 seconds, removing the previous best of 39.63 they held jointly with Kingston College. Defending champions Kingston College, with Jhevaughn Matherson on anchor, were second in 39.74. Cornwall College were fourth in 41.20 and Munro College, sixth in 41.52, as Excelsior and Jamaica College failed to finish.

It was smooth baton changing all the way for Calabar after a good start from Tyreke Wilson. Christopher Taylor ran a solid leg, with Michael Stephens opening up on third leg and DeJour Russell powering home on the final leg to give the green and black-clad boys their seventh win in the event.

Assistant Coach Omar Hawes was very impressed with the execution of the race.

"It is awesome what these guys have done. It could be much faster, but thanks to God for what he gave us. Technical sprinting was at its best today and better exchanges would have seen a much faster time. Hope they remain healthy as they will be back for two more years and will be able to break the record once again," said Hawes, who stated that they will be competing in three more overseas meets this season.

The event was close for the most of the event way as Kingston College, Edwin Allen and Jamaica College kept the favourites on their toes for the first leg, but the outstanding Christopher Taylor ran a split of 46.13 on anchor to go clear of his rivals and give his school their eighth title in the event.

St Elizabeth Technical regained the 4x800m title they last won in 2015 by upstaging a weakened St Jago team without top man Keenan Lawrence, who was out due to injury. Defending champions St Jago had the early lead, but after the first exchange, Rayon Butler put the winners in front and anchorman Jauvaney James, with a split of 1:51.67, extended the lead to give the Reynaldo Walcott-coached school their eighth win in the event. Shamar Salmon ran the third leg for the champions. St Jago were second in 7:39.67, Calabar third in 7:43.62, Jamaica College fourth in 7:44.26 and Kingston College, seventh in 7:44.26.