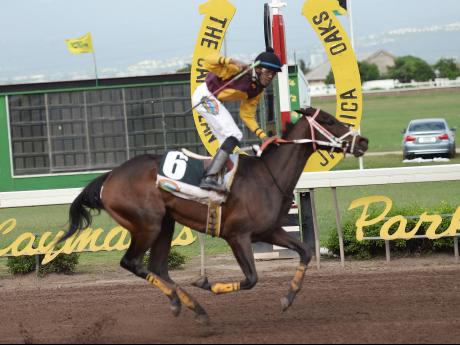 MARLENE MY LOVE yesterday ran away from a distressed-looking BILINGUAL to romp the 10-furlong Caribbean Choice Jamaica Oaks by a city block, a dozen lengths to be exact.

Settled in sixth position going past the stands and into the clubhouse turn by jockey Jevvanne Erwin, the bay filly sat in the pace down the backstretch before shooting to the lead three-and-half furlongs out.

Anthony Nunes' 3-5 favourite, BILINGUAL, went in chase with Robert Halledeen, but was caught flat-footed and made no impression when Erwin unleashed MARLENE MY LOVE coming off the home turn.

"She got a clear run today," trainer Dwight Chen said after the 10-furlong event.

Bred to get every inch of the Oaks' 10 furlongs, MARLENE MY LOVE, who won at odds of 2-1, is a half-sister to 2010 Triple Crown champion and three-time Superstakes winner MARK MY WORD.

Chen said the Howard Hamilton-owned filly's next stop will be June's Jamaica Derby and confirmed Erwin as the rider.

Erwin, who was aboard the filly for the first time in a race, said she was travelling "very comfortably" down the backstretch while SARAH LEE and THORNHILL MISS carried the nine-horse field.

BILINGUAL's expected late surge did not materialise. After being sent in chase of MARLENE MY LOVE, she flattened out and appeared erratic at the end of the race.

Though BILINGUAL disappointed in the Oaks, Nunes shared training honours with champion Wayne DaCosta, both saddling two winners on the 11-race card.

MESMERIZE opened the programme at 2-1 for Nunes before DaCosta responded with 4-5 favourite PRINCESS KATRIEL in the second.

Nunes landed the fourth with down-in-class COUNTER ATTACK among $250,000 claimers.

However, the team of DaCosta and jockey Omar Walker sealed a two-timer with FEARLESS SAMURAI, who outbattled ANOTHER BULLET in a one-mile open allowance event, three weeks after landing the 2000 Guineas.

FEARLESS SAMURAI improved his Guineas time significantly, by 2.3 seconds, clocking 1:37.4 after posting 1:40.2 at the distance among his peers

The champion trainer said he was not surprised by the gelding's improvement.

"Not at all. He has shown me in exercise before that he is capable of doing it. What he keeps doing is opening up at the two (furlongs), then when he gets lonely he slows down," he explained.

DaCosta said he was unsure whether FEARLESS SAMURAI will face the starter in next month's Lotto Classic Governor's Cup, a 10-furlong conditional race for three-year-olds in which stakes winners such as DaCosta's runner carry topweight.

"It all depends on the weight. Then again, if he is carrying almost topweight in open allowance, he might as well run against his peers," he said, adding, "we will have to weigh the pros and cons and see how it goes."