Chelsea close in on EPL title 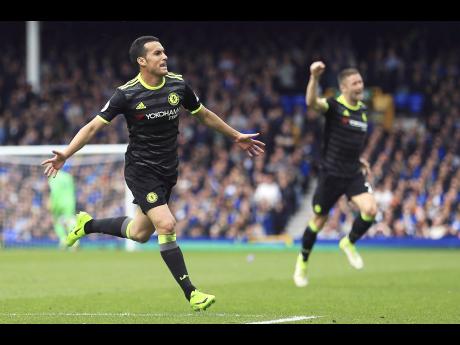 Chelsea stayed four points ahead of Tottenham. Antonio Conte will be guaranteed the trophy in his first season in charge of Chelsea if the leaders win three of their last four games ahead of the FA Cup final against Arsenal.

"We have to have great enthusiasm and great patience because I think we are having a great season but to become a fantastic season we must win (the league)," Conte said. "Now it is important for us to prepare the right way the next game. If we don't win against Middlesbrough (on May 8) then you lose this great win."

Everton's eight-match winning run at Goodison Park ended after Pedro broke through the home resistance in the 66th minute. Pedro collected the ball on the edge of the area, shifted it onto his left foot and fired a shot from 25 yards (meters) just under the crossbar.

"This feels massive," Cahill told broadcaster Sky Sports. "We've done what we needed to do. You can see the celebrations at the end. We knew this was a massive game, one of the hardest we had.

"It was convincing in the end, but we had to work very hard for it. We felt we needed to go to the next level in the second half. It was a special goal from Pedro. In some games you need a bit of class."