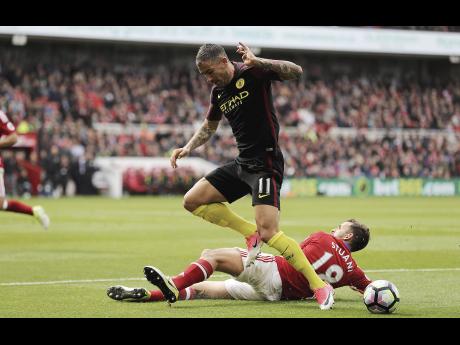 Gabriel Jesus marked his return to Manchester City's starting lineup by rescuing a 2-2 draw against relegation-threatened Middlesbrough in the Premier League yesterday.

But City failed to take advantage of Manchester United drawing earlier in the day with Swansea and strengthen its place in the top four Champions League qualification places.

Fourth-placed City remains only a point ahead of United with four games remaining, but it would have been even closer had Gabriel Jesus not headed in Sergio Aguero's cross in the 85th minute. The forward is back after 10 weeks out with a foot injury.

Middlesbrough led through a first-half strike from former City striker Alvaro Negredo but the visitors drew level in controversial fashion when Aguero netted from the spot. Boro players reacted with fury when Leroy Sane went down under the challenge of Marten de Roon.

Calum Chambers appeared to have secured three priceless points for Middlesbrough in the 77th minute.