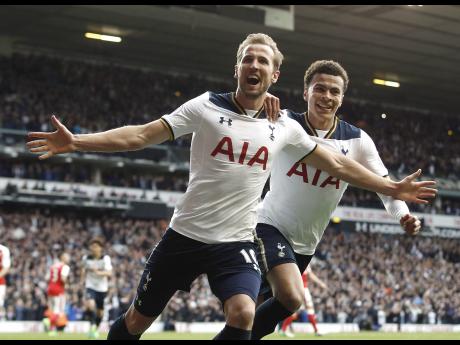 Tottenham shifted the balance of power in north London's football rivalry by securing its first Premier League finish above Arsenal in 22 years with a 2-0 victory over its neighbor yesterday.

Arsenal imploded inside 77 seconds at the start of the second half to hand Tottenham a ninth consecutive league win. In the penultimate game at White Hart Lane before the stadium is demolished, Dele Alli scrambled the ball into the net and Harry Kane won a soft penalty that he converted.

"We worked hard. We outworked them," Kane said. "The fans have got the bragging rights for now, but we've still got four important games to finish off."

Manager Mauricio Pochettino's hopes of overhauling Chelsea's four-point lead at the top of the league are fading after the leaders' win over Everton. But Spurs are still locking down second place for their highest finish in 54 years and on the brink of a second successive season in the Champions League for the first time.

There was no doubting which team was on top. It looked like Tottenham might pay for its missed chances in the first half when Alli headed wide and Christian Eriksen swept a shot over and Jan Vertonghen was denied by goalkeeper Petr Cech.

Had it not been for Cech's agility, Arsenal might have fallen behind sooner. The second period opened with Victor Wanyama's shot being tipped over and Kane's effort collected by the goalkeeper.

But Arsenal was undone in the 55th minute. Kane ran onto a long throw-in and held up the ball under pressure from Gabriel Paulista. Alli seized possession and passed to Eriksen, who weaved past Laurent Koscielny before testing Cech. The shot was parried, but Alli stuck out his left boot into a crowded area to clip the loose ball into the net.

Arsenal never recovered. It took 77 seconds for the penalty to be conceded, with Kane going down lightly under Gabriel's challenge and winning the spotkick.

Cech kept his team in the game, with a flying save that prevented Vertonghen's shot from curling into the top corner and Toby Alderweireld's effort being blocked.

But Arsenal could find no way back against Tottenham, which is now virtually assured of making the top four, given its superior goal difference over fifth-place Manchester United.

Arsenal's season could still end with the FA Cup if it beats Chelsea at Wembley Stadium. Tottenham will still be hoping Chelsea doesn't enter the final as Premier League champions.