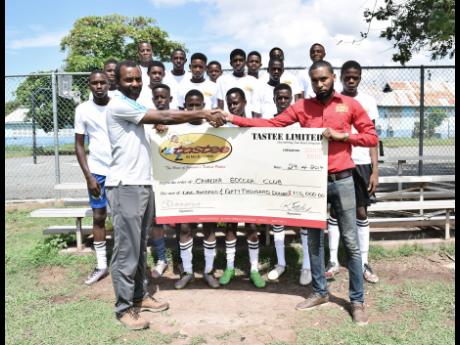 Contributed
Alessandro Boyd (right), marketing and PR assistant at Tastee Limited, hands over a cheque valued at $150,000 to Rudolph Speid, chairman of the Cavalier Soccer Club.

Local fast food chain Tastee handed over $150,000 to Cavalier SC to help their participation in the Cayman Airways International Under-15 Youth Football Cup next week in the Cayman Islands.

Alessandro Boyd of Tastee's marketing department made the presentation to chairman of Cavalier SC, Rudolph Speid on Saturday at the Alpha Institute.

Speid said that Tastee's sponsorship has helped the club tremendously as expenses continue to be one of the biggest challenges they face.

"This trip, excluding tickets, will cost US $10,000 and sponsorships like these help us to allow players at this age group to gain international exposure, which is a part of their pathway to develop properly by playing against some of the best players in the world at an early age. We will be able to gauge our progress against players who have been exposed to some of the best training facilities in the world," Speid said.

Ryan Foster, Group CEO at Tastee, said that he was pleased with Cavaliers' youth development programme and the level of success that the team has had to date.

Meanwhile, Cavalier SC U-15 coach, Baris Johnson is expecting a great performance from the team.

"We are going there to perform well. The club won the Under-14 tourney there last year and this year the hope is to emulate that victory," Johnson told The Gleaner.

He is also hopeful that the players will impress and be seen by some bigger clubs.

"We want to catch the eyes of the bigger teams that will be participating at the tournament," he added.

The Cayman Invitational Cup will commence today and involves 12 teams including Manchester City of England.

The Cavalier team will depart for the Cayman Islands tomorrow and will play their opening game against IMG Academy at the Truman Bodden Sports Complex on the same day, starting at 5 p.m.

Cavalier will oppose Alchemy the following day and close off their Group A fixture against the Cayman National team on Friday.