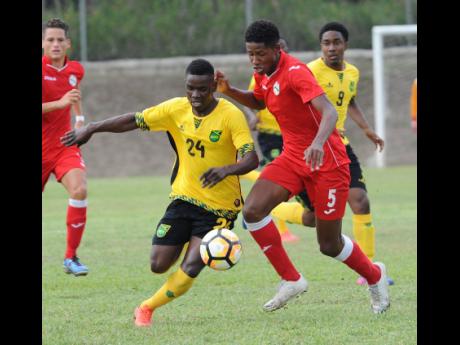 Ian Allen
Ricardo McIntosh (Jamaica) dribbles the ball past Cristoter Horente (Cuba) during the second practice match between Jamaica and Cuba under 17 football teams at the Jamaica Football Federation (JFF) Academy in February. 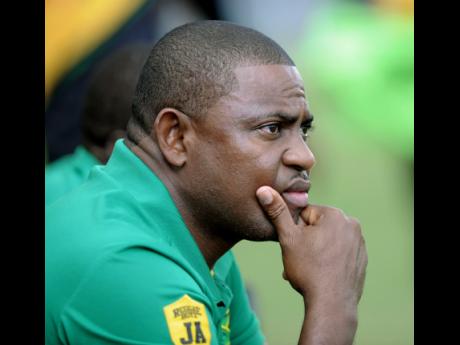 Despite failing to qualify for the FIFA Under-17 World Cup which takes place in India this October, national head coach Andrew Edwards said that he wants to continue in the role as he can still contribute. Jamaica missed out during the CONCACAF U-17 Championship, that serves as a qualifier to the global event, when they were ousted in Panama last Saturday. The young Reggae Boyz were thrashed 5-1 by Mexico in their final group match.

Three days earlier, they defeated El Salvador 3-1, but lost on the opening day on April 23 to the United States 5-0.

Jamaica finished third in the group on three points, behind group winner USA (9) and Mexico (6). El Salvador ended without a point.

"The Under-17 campaign is over, so it is up to the boardroom people (Jamaica Football Federation directors) to decide whether I will continue working with the Under-17 programme," Edwards told The Gleaner after the team returned home.

"I believe that I have more to offer. However, I want us to improve on the preparation period leading up to tournament. I am willing to continue with the programme," Edwards, who also failed two years ago with the Under-17 outfit, said.

"Overall, it was not as good as we expected. We did some things good but lacked consistency. We did not take care of the ball. We gave up the ball easily in the three games," Edwards said.

"The players need to adjust in the game quicker. Our players don't play a lot of bigger opponents. We need to play more international games in preparation for tournaments," he lamented.

He also pointed out that Shane Ricketts, who played for Reno in the local Red Stripe Premier League, was Jamaica's best player in the tournament.

"There have been suggestions for our Under-17 and Under-20 teams to participate in the local premier league and that should be ratified and accepted by the board," Edwards concluded.