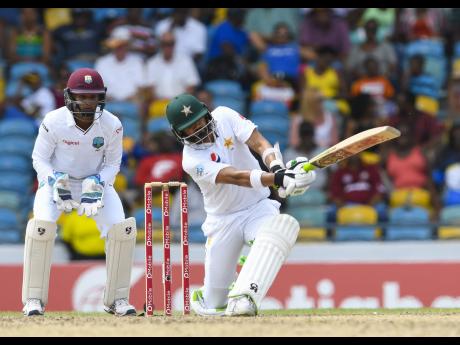 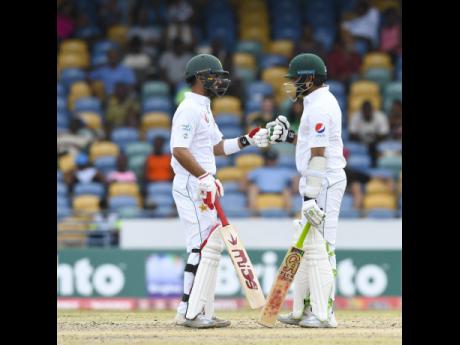 Randy R Brooks
Pakistan's Ahmed Shehzad (left) and Azhar Ali in talks during their partnership of 100 runs on the second day of the second Test match between West Indies and Pakistan at Kensington Oval, Bridgetown, Barbados, yesterday.
1
2

Three wickets in the final session helped the West Indies claw their way back after three earlier blemishes had put Pakistan firmly in control of the second Test at Kensington Oval yesterday.

Replying to West Indies' first innings of 312 all out, Pakistan finished the second day of the pivotal contest on 172 for three 140 runs adrift of the lead.

Prolific opener Azhar Ali was already in sight of triple figures unbeaten on 81 and was partnered by captain Misbah-ul-Haq on seven.

Right-handed opener Ahmed Shehzad lived a charmed life for his 70, benefitting from three chances before becoming one of two wickets to fall to leg-spinner Devendra Bishoo who finished with two for 53.

The Caribbean side had earlier squandered the opportunity to build a sizeable first innings lead when they lost their last four wickets for 26 runs to be dismissed for 312, 65 minutes before lunch.

Disappointingly, neither overnight batsmen - century-maker Roston Chase nor captain Jason Holder - managed to add to their scores, falling within the first nine balls of the morning.

In the 14 overs available before lunch, West Indies muffed their only chance to get an early breakthrough as Pakistan worked their way to 36 without loss at the break.

Shehzad had made three with the score on five when he chipped fast bowler Shannon Gabriel loosely to mid-on where Vishual Singh was slow off the mark and grassed the low offering in the third over.

West Indies also had only themselves to blame in the following session as Shehzad was twice let-off through no-balls as he and Azhar put on 155 for the first wicket.

Pakistan reached tea safely on 106 without loss and they batted through the next hour without alarm to further frustrate West Indies.

Azhar, who completed his 26th Test half-century in the fourth over before tea when he swept Bishoo to the square boundary, has so far faced 193 deliveries in a shade over five hours at the crease and counted seven fours.

Shehzad, unbeaten at tea on 40, reached his fourth Test half-century 20 minutes after the resumption and had faced 191 balls in just over four hours and struck eight fours, when his luck finally ran out.

An hour from the close, he prodded forward to one from Bishoo which spun, took the edge and carried low to slip where Shai Hope grasped the offering.

His dismissal triggered a slide for Pakistan where three wickets tumbled in the space of 23 runs.

In the following over, Babar Azam got a leading edge back to Gabriel to fall without scoring at 156 for two and 20 balls later, veteran outstanding right-hander Younis Khan also fell for nought, pulling a long hop from Bishoo to Gabriel at short mid-wicket.

A Joseph b Yasir Shah 8

S Gabriel not out 0

Azhar Ali not out 81