The Wright View | Children at play 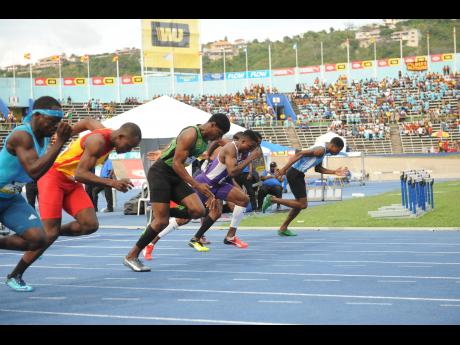 Gladstone Taylor/
Student athletes participating in a Class One 100m sprint at the recently held ISSA/GraceKennedy Boys and Girls’ Athletics Championships in March.

There was a time when children went to school to learn the three "Rs": Reading (W)riting, and (A)rithmetic. Sports was something that was built into the curriculum to teach the lessons of life. How to accept and abide by rules, learning the value of a teammate, learning to accept defeat, as a part of sports (life), and most importantly, learning that just participating is often more important than winning.

A day at school in the 50's and 60's (and maybe the 70's) consisted of recess, when that time was essentially your own, and Physical Education, wherein every child had to involved in a sport, whether it was just learning the nuances and rules of the particular sport, or being involved in House matches or form matches.

At Wolmer's Boys' School in the 60's, every boy had to enter at least one event in the build up to Sports Day. I remember one evening at a Manning Cup match, we beat the dreaded Kingston College 4-1, if memory serves correctly, and the last few minutes of the game featured "popping" and showboating by the team, as we all revelled in the victory. The following morning at prayers, the Headmaster, H 'Chicken' Walker, called the entire team to the stage. All the boys pressed forwards in anticipation of a rousing "hip, hip, hooray" for the team and our "heroes". Instead, the team (and us) were threatened with detention, for trying to humiliate our opponents.

The now chastened boys were taught that Wolmer's Boys must neither celebrate insanely when he wins, or sulk in defeat. Wolmerians should accept victory humbly, and although we should hate defeat, we should not make a poor display of it.

I do believe that that was an unspoken theme of school sports of the 50's and 60's. The children of that generation enjoyed physical activity and competition, winning some, losing some, but at all times remembering that sports was just a minor cog in the real reason for school, preparing us for life as adults. Making a positive contribution to our chosen vocation, whatever that vocation may be. Today, children at play, or in other words, school sports, have been hijacked by adults whose win-at-all-cost mantra has transformed schools to a place where children are bought and sold like commodities, and the three Rs now take a back seat as training, practising, and performing in competition takes precedent over matriculating to a reasonable life after school.

A columnist whose nom-de-plume is The Laird, has written a piece in the online newspaper, Public Opinion that was also the subject of an editorial in the other daily newspaper. The author of the article postulates that the island's top secondary institutions do not operate as schools, whose primary purpose is to produce well-educated and well-rounded young men and women, or whose other primary purpose is to produce graduates with adequate qualifications for either the workforce or tertiary education.

Instead they operate as sports clubs. The Laird's column revitalises the pioneering work done by former Jamaica national football captain and chemist Dr Lascelve 'Muggy' Graham, who spent weeks and months writing, lecturing, and meeting with stakeholders and Ministry of Education officials, in a partially successful effort to get schools, via the Inter-Secondary Schools Sports Association, and the Ministry, to regulate the transfer (or buying) of athletes from School A to School B for the sole purpose of winning.

The article in the Public Opinion and the editorial in the other daily publication will, I hope, reignite the powers that be to take another look at whether high schools should give greater focus to providing students with a sound education, instead of what appears to be a blinkered determination to produce professional athletes.

It is not too late to save our children. Children at play MUST be just that, children at play. Not what occurs now, lawsuits and social media abuse of anyone, child or adult, who is portrayed as being an obstacle in the mad rush to win, no matter what.