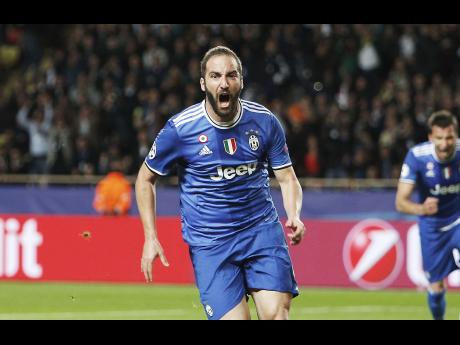 Record-signing Gonzalo Higuain scored two opportunist goals and veteran goalkeeper Gianluigi Buffon made some crucial saves as Juventus won 2-0 at Monaco to take a commanding lead from the first leg of their Champions League semi-final yesterday.

Monaco had scored 146 goals before this game, including three times home and away in the previous two knockout rounds. But Juventus gave a masterclass in how to withstand pressure and then punish on the counter attack, with both of Higuain's goals coming after good Monaco spells.

"The job is not complete," said Juventus coach Massimiliano Allegri, whose side remains on course for a domestic and European treble. "But this could become an extraordinary season for us."

Higuain pounced in the 29th minute, side-footing home after Dani Alves had latched on to his pass down the right before back-heeling the ball back to the Argentina striker as he sprinted into the area.

The Juventus bench rose as one after Higuain slid in to turn home a deep cross in the 59th, with the irrepressible Alves again the provider.

Before this game, Higuain had only scored two goals in 24 games in the knockout stages of the competition. A strangely poor return for such a prolific striker.

"Goals were not coming for me in this competition," Higuain said. "I knew I just had to stay calm and keep working hard."

Before his opener, Monaco's 18-year-old striker Kylian Mbappe had forced two smart saves from the 39-year-old Buffon on his 100th Champions League appearance for the club.

"He's still No. 1 in the world," Allegri said. "He is always decisive in the big games."