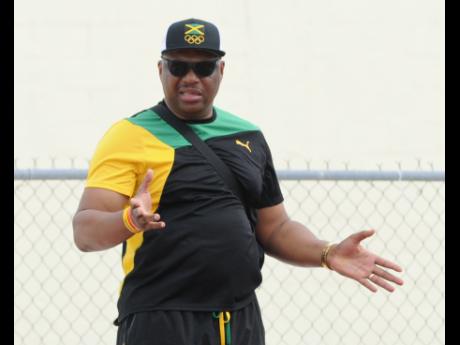 Maurice Wilson, who served as technical director for Jamaica's team to the recently concluded World Relays in The Bahamas, says he is satisfied with the team's performance in the archipelago, but is warning Jamaican fans to brace for less international success in the coming years.

Jamaica's performance was seen as lukewarm in some quarters, and Wilson had to respond to criticism from male team captain Yohan Blake after a baton mishap in the men's 4x100m heats, but the respected coach maintains that the team's efforts should be applauded given its composition and the quality competition they faced in Nassau.

Furthermore, Wilson believes that it is unrealistic to expect Jamaica's golden period of athletics success, which began at the 2008 Olympic Games to continue for much longer.

"It is a good time for us to get back down to earth. From 2008, we have been having some glory years, and at some point in time, there has to be some transition. I said before the team left Jamaica (for the World Relays) that once the other countries were to bring most of their seasoned athletes, then it would not be an easy run for us," said Wilson.

"It was clear that Canada, America and Germany had some of their seasoned campaigners who brought a lot of stability to the performance of their team, so taking all of that into consideration, I think we did very well," he added.

"First of all, the team maintained its position from the last World Relays by coming second behind the United States of America. Based on the fact that this year, we were without a lot of our more seasoned athletes, I think the team did extremely well because the team was selected on the athletes who made themselves available," said Wilson. "Most of these athletes are on a second or third tier ranking in terms of positioning ... ."

Thirty-three of Jamaica's 77 Olympic medals were mined at the last three instalments which took place in Beijing (2008), London (2012) and Rio de Janeiro (2016) with another 33 of the country's 110 World Championships medals coming since the 2009 event in Berlin.

Additionally, 15 of the country's 22 Olympic gold medals came since the 2008 Games, while 24 of the 31 World Championships gold medals won by Jamaica were secured since 2009.

Meanwhile, Wilson expressed disappointment and surprise at Blake's criticism after the sprinter suggested that the technical team had to take some blame for the team selection after a blunder on the second exchange between second leg runner Kemar Bailey-Cole and Jevaughn Minzie resulted in a disqualification in the men's 4x100m heats.

The coach, however, explained that athlete selections were made based on availability, but also agreed that there is a need for more practice sessions ahead of relay events.

"I felt that he (Blake) was extremely frustrated because this would have been the first time that I can recall clearly for a very long time in his career that he would have been on a team that is not in the final of a major championships, so I can understand his frustration, but I was a little surprised and disappointed by the utterances because we have such a good relationship as a team," Wilson said.

"We are not playing any blame game, but if the baton falls, we go back and try to correct the issues, but they are professionals and need to accept responsibility when there is an error. I don't understand how you could blame the dropping of a baton on the selecting of a team, especially when the options were limited," he added.

The other member of the team was lead leg runner Everton Clarke, who was making his first appearance at the senior world level.