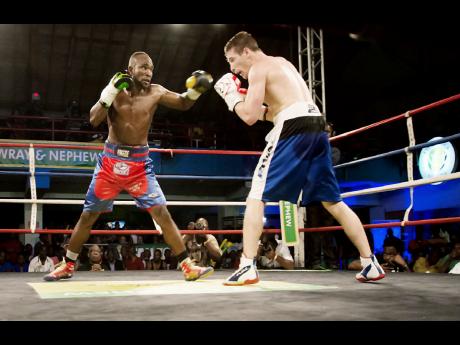 The Jamaica Boxing Board of Control (JBBC) has ruled that Tsetsi Davis' split decision win over Team Canada's Dave Leblond in the Wray & Nephew Contender Series will not be overturned. However, Leblond will be returning to the competition to compete next week.

A source close to the JBBC said that although Leblond lost his appeal to have a rematch with Davis, on the grounds of "egregious judging", he will be taking the place of Canadian Ryan Wagner for next week's match.

"Wagner, who was supposed to fight next week for Canada, did not pass his medical. He failed the MRI (magnetic resonance imaging), so his doctor did not pass him to fight," the source told The Gleaner.

Leblond's trainer Patrice Trudeau said that he is glad that they will be returning to the competition as they love Jamaica and its people whom he described as friendly and welcoming to them on their visit last month.

"Right now, he (Leblond) is pumped up because he knows that Jamaicans are behind him," Trudeau said. "We've been talking about this for weeks, saying 'Wow, this is unbelievable!'.

"Dave will do his best, but we want to go and put on a good outing because we want to express our gratitude to the Jamaicans who are supporting us. We want to give the Jamaican fans a present because they've been such good support for us."

Leblond will now be up against Team Jamaica's Nico Yeyo, who will be making his professional debut.

"We're taking this fight seriously because Dave had only one fight before Tsetsi,"Trudeau added. "It's the same with Yeyo, so, of course, we're gonna take him seriously. In this sport, you don't win by pure talent. You've got to have the fire. We want a chance to stay longer in Jamaica and to possibly face Tsetsi again in a rematch (later in the competition)."