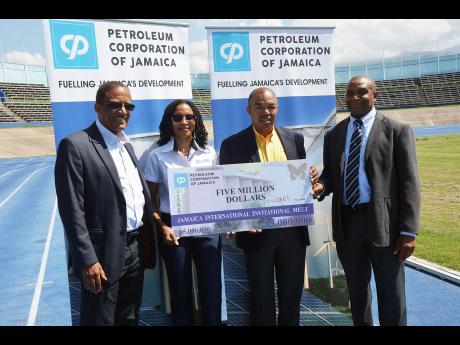 Contributed
Camille Taylor, the Petroleum Corporation of Jamaica’s manager, corporate affairs and communications, poses with members of the Jamaica International Invitational Meet organising committee (from left) Lincoln Eatmon; Dr Warren Blake, chairman; and Ludlow Watts, deputy chairman, after handing over a cheque for $5 million for the staging of the meet, which is scheduled for Saturday, May 20, at the National Stadium in Kingston. The contribution, which is the final tranche of a $15 million, three-year sponsorship package, was handed over at the stadium yesterday.

The Petroleum Corporation of Jamaica (PCJ) has provided $5 million for the staging of the 2017 Jamaica International Invitational Meet (JIIM), which is set for May 20 at the National Stadium in Kingston.

The contribution is the final tranche of a $15 million sponsorship package - with equal allocations of $5 million over a three-year period - that the PCJ announced in 2015. The support was given against the background of the schedule of major track and field events over the period, including the IAAF World Championships in Beijing, China, in 2015; the 2016 Summer Olympics in Rio de Janeiro, and the upcoming 2017 World Championships scheduled for August in London, England.

The JIIM, which is among the biggest sporting events held on local soil, is a critical element in Jamaica's track and field programme. It serves as a preparatory event for major championships, giving local athletes the chance to experience elite-level competition without leaving the country.

Camille Taylor, the PCJ's manager, corporate affairs and communications, said: "The PCJ's $15 million sponsorship package for the Jamaica Invitational was given to support Jamaica's preparation for the world's biggest track and field events between 2015 and 2017, and it has been a worthwhile investment. We were thrilled with Jamaica's stellar performances in the Beijing World Championships and the Rio Olympics, and we are looking forward to another excellent show this summer in London."

Dr Warren Blake, chairman of the JIIM organising committee, said, "It takes strong financial support to stage a meet like the Jamaica International Invitational each year, and we are extremely grateful to the PCJ for this multiyear sponsorship deal."