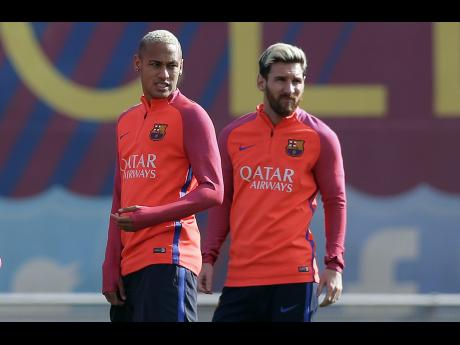 The defending champions, who lead the Spanish league on the head-to-head tiebreaker but have played one game more than Madrid, will need to be at their best tomorrow against a Villarreal team with the league's second-best defence.

"We have to win every match until the end to keep putting pressure on Madrid," Barcelona forward Luis Suarez said.

Villarreal won't be easy opponents, even with Lionel Messi, Neymar and Suarez all looking for goals. The team has conceded fewer goals than any team, except for Atletico Madrid. It's also in the chase for a Champions League spot, currently in fifth place.

Barcelona, however, have scored a league-leading 104 goals, and are also carrying momentum after four consecutive victories that included a 7-1 rout of Osasuna and a 3-2 win over Madrid at the Santiago Bernabeu Stadium two weeks ago. The Catalan club scored at least three goals in each of their last four games.

Its attacking trio is only two goals short of a 100 for the season in all competitions. Messi alone has scored 49 goals, including 33 to lead the Spanish league. Suarez has 34 goals and Neymar 15. The three scored a record of 131 goals last season, and had 122 in 2014-15.

Villarreal are five points behind fourth-place Sevilla, the last team currently securing a Champions League spot. The teams in fifth and sixth places will play in the Europa League.

Villarreal's solid defence, which has conceded only 28 goals in 35 league matches in the first season under coach Fran Escriba, starts with the efforts of veteran captain Bruno Soriano in the midfield, and continues with the reliable performances of Mateo Musacchio and central defender Victor Ruiz, who could miss tomorrow's game because of an injury.

Barcelona, trying to win their second consecutive Spanish league title, may count on the return of midfielder Andres Iniesta, who missed the game at Espanyol last weekend because of a right-leg muscle injury.