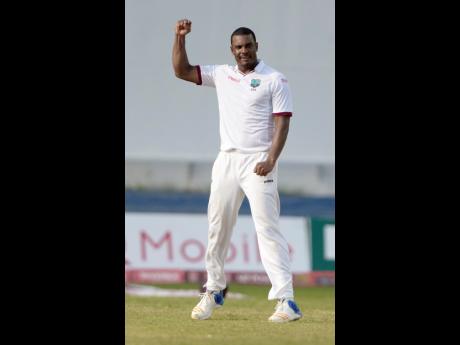 Fast bowler Shannon Gabriel has heaped praises on his teammates and captain Jason Holder, following West Indies' demolition of Pakistan in the second Test on Thursday.

The spearhead of the Windies attack grabbed five for 11 in a brilliant spell of pace bowling on a wearing track as Pakistan were dismissed for 81 in pursuit of 188 for victory at Kensington Oval, giving the hosts a 106-run win.

Gabriel, who finished with a nine-wicket match haul to earn Man of the Match honours, said the success had been as a result of a collective team effort.

"I think it was a good performance, a good team effort," the Trinidadian told reporters.

"The way Roston (Chase) played in the first innings and the way the bowlers bowled - (Devendra) Bishoo picking up some key wickets and the rest of bowlers.

"In the second innings, Shai (Hope) put up his hand and batted although he was struggling [previously], but we always know, as a team, once we got a good lead on a fifth-day pitch, things would happen for us."

Gabriel was well supported by seamer Holder, who claimed three wickets in each innings, and also gathered a fluent half-century in the first innings.

However, the 29-year-old Gabriel also pointed to Holder's captaincy as key in the success.

"Jason is a good captain. He's learning and improving a lot," he stressed.

"One good thing about him is that he's willing to take advice and try new things, and that's a good thing for the team and for West Indies cricket."

Following a slow start to his international career, Gabriel has picked up intensity in recent months and has now emerged as the leader of the West Indies attack.

He has taken 62 wickets from 25 Tests, and his form in the longer format has subsequently led to his debut One-Day International, where he has also reaped success.