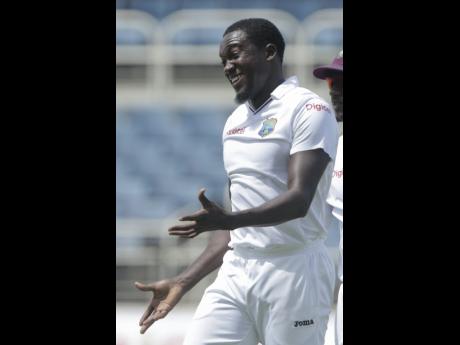 
HOVE, England, CMC – Jerome Taylor said he welcomed the chance to play county matches in England and hoped his brief stint with Sussex can spur a recall to the West Indies team.

The 32-year-old fast bowler last month reversed his decision to retire from Tests last year, admitting he made a mistake and was working hard to regain a place in the Caribbean side for future matches.

“I think I might have jumped the gun retiring from international cricket.,” he told the Argus newspaper.

“When I sit at home and watch, I just want to get back out on the park and play for the West Indies again. I want to give back to West Indies cricket. That is what I always wanted to do growing up and hopefully I can do it again.”

Taylor has played 46 Tests, 85 One-day and 23 Twenty20 Internationals for West Indies between 2003 and his decision to step away from Tests last July.

He played in the Regional Super50 Tournament earlier this year for the Jamaica Scorpions, showing he had lost little of his fire and collected 16 wickets at 18.81 apiece in eight of his side’s 10 matches, and he also turned out for the franchise in four Regional 4-Day matches in which he grabbed eight wickets at 28.62 each.

The West Indies selection panel, headed by Courtney Browne, however, ignored his claims and a record that include 130 Test scalps at 34.46, 126 ODI wickets at 28.16 and 24 T20I wickets for the preceding England ODI and ongoing Pakistan home series.

He is looking to play a more prominent role having been disappointed with his figures of 1-54 from eight overs, as the Sharks secured a much-needed win on his debut against Glamorgan last Tuesday, having only arrived from the Caribbean 24 hours earlier.

It was only the county’s second win in the One-Day Cup since August 2014 and boosted their hopes of challenging for a place in the knockout stages.

“It was great to get the win, but I was not satisfied with my performance,” he said. “I was still probably a bit jet-lagged, but I don’t want to blame it on that. It is a game of cricket and I have played enough cricket to know what is required.

“There is a lot of room for improvement, and hopefully, I can give some very good performances for Sussex while I am here. It is only a couple of weeks, but I will try to adapt as quickly as possible.”

He said: “I’m loving every minute of it so far and the lads in the dressing room have made it a lot easier for me to settle in. But my body needs to acclimatise to the different temperature over here and the pitches are different.

“It was also a bit strange bowling down the hill, but after the first three or four overs, you know you have to pull yourself up a bit. This is home for the next two to three weeks so I need to get used to it.

“I’ve been in England before, but a long while ago, so it is about learning all over again. I am willing to do that and I’m sure it won’t take me long to hit top form.”