Swansea the big winners as EPL relegation fight heats up 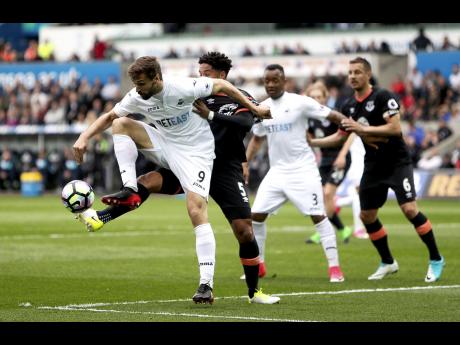 With an arm draped around one of his players, Swansea manager Paul Clement walked towards the team's celebrating fans and held up two of his fingers.

And this relegation battle could go right to the wire.

Swansea were the big winners yesterday as the fight to stay in the world's richest domestic league took more twists across three back-to-back games.

After witnessing losses for relegation rivals Crystal Palace and then Hull, Swansea beat Everton 1-0 to climb out of the bottom three for the first time in a month. That's seven points won from the last three games for the Welsh club that looked in such a mess in late December when it fired American coach Bob Bradley.

"It's one of my proudest moments," said Clement, a former assistant at Real Madrid, Bayern Munich, Paris Saint-Germain, and Chelsea, who is starting to look the part as a coach in his own right.

Last-placed Sunderland are already down. Next-to-last Middlesbrough are set to drop, too, on Monday. It looks to be down to three teams - Palace, Swansea or Hull - for the other relegation place.

Palace have 38 points, Swansea 35, and Hull 34. Next week, Hull visit Palace and Swansea are away to Sunderland.

Yesterday, Bournemouth and Stoke clinched another season in the Premier League. Burnley and Watford are all but mathematically safe.

The all-important goal by Fernando Llorente ended up being a stroke of luck.

Jordan Ayew floated over a cross from the right and Llorente leapt highest at the far post, bundling the ball home with his left shoulder. For one of the best headers of the ball in the league, it was an ugly but decisive finish.

This win for Swansea built on their victory over Stoke and a draw at Manchester United over the last two weeks.