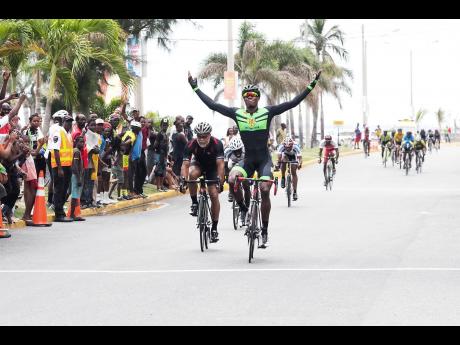 The 2017 staging of the Jamaica Cycling Federation's (JCF) Kingston Criterium will take over the streets of downtown Kingston this afternoon.

The picturesque Kingston Waterfront will once again provide the backdrop for an intense day of cycling. The event returns to the cycling calendar following a successful 2016 staging, which saw then Caribbean and national champion Marloe Rodman dominating the field.

Action in the Kingston Criterium is scheduled to get under way at 1 p.m. with registration for the events from 11 a.m. to 1 p.m.

The Kingston Criterium is a closed-circuit event with cyclists racing several laps to complete a race. The events will be contested based on categories, including women's and men's elite, masters' and juniors' categories. In addition to the respective categories, there will also be a kids' sprint event. Cyclists race along the circuit, which includes parts of Ocean Boulevard, Orange Street and Port Royal Street.

The Kingston Criterium is expected to feature some of Jamaica's finest riders, including current national road champion Oshane Williams and 2014 Commonwealth Games representative Marloe Rodman, who will be defending his title.

Andrew Rousseau, vice-president of the JCF, is excited about the event and expects an even better display from the cyclists today.

"These are exciting times for cycling. The Criterium has the potential to surpass what we did in 2016 in terms of the entertainment value of the event and the competitiveness. The defending champion, Rodman, is back in the island after starting his qualification push for the next Olympics, and we have a host of top cyclists and clubs that will be involved," said Rousseau.