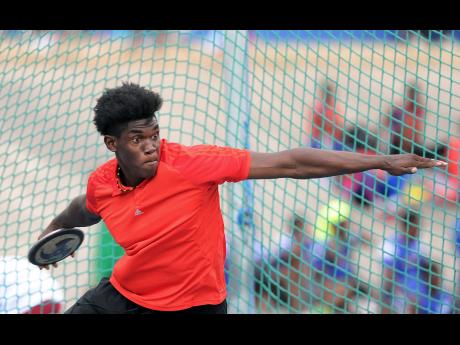 Encouraged by good early form, Fedrick Dacres is considering a throws double at the National Senior Championship in June. Speaking on Saturday at the first JAAA All Comers meet of the season, Dacres says he intends to contest both the discus and the shot put at Nationals.

A national record holder in the discus, the 23 year old University of the West Indies student has made progress in the shot including a reported mark of 21.49m. "Well for me, shot put is always fun, so I don't take it as seriously, but if I can do it, I will", he said to explain that the discus is his primary event. "I'm doing it to get the marks and everything", he elaborated, "but I just don't take it as serious as the disc."

Asked about a possible throws double at Nationals, the 2015 Pan-American Games discus champion replied, "I will do it at the Nationals because since I was young I've been doing it, so why stop doing it now when it hasn't hampered me in any way?"

"I'm going to see if I can make it for both", he forwarded.

Few successfully double at the global level but Holland's Rutger Smith did place third in both discus and shot at the 2007 World Championships.

Dacres promises that the Nationals will feature great competition in the throws. "It's going to be very hot overall", he predicted, "because you have shot, I can compete with the big man a bit so I'll try to push him." The 'big man' he referred to is 2015 World Championship shot put bronze medallist O'Dayne Richards. Regarding the discus throw, he said, "I think we have, you know, six guys who can get over 60.

Dacres extended the national record in the disc to 68.88m at Excelsior High School earlier this year.

He also expects great things from the lady throwers, led by Danielle Dodd and Kellion Knibb. Dodd and Knibb, both 2016 Olympians, have already set national records in the shot and discus respectively this season.