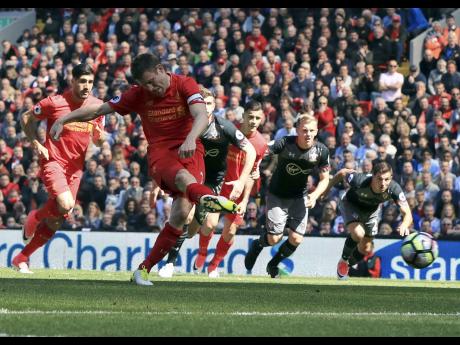 James Milner's perfect record from the penalty spot ended at a crucial time in the English Premier League season for Liverpool in a 0-0 draw against Southampton yesterday, damaging his team's quest for Champions League qualification.

The left back scored from his first seven spot kicks this season, but his eighth attempt was saved by Southampton goalkeeper Fraser Forster in the 66th minute of a lacklustre game at Anfield.

"I can't do more than hold my hands up and apologise to the boys," said Milner, whose last penalty miss in the Premier League was in 2009.

The point lifted Liverpool back into third place above Manchester City, but this was a missed opportunity in its bid to finish in the top four and return to Europe's elite competition next season.

Southampton defended deep and in numbers, and barely ceded a chance to a Liverpool side that played too narrow and was predictable going forward.

Liverpool have picked up only two points from its last three games at Anfield and are struggling without injured top scorer Sadio Mane.

The Reds have two games left, away to West Ham and at home to Middlesbrough, but can still be caught by City, Manchester United and Arsenal.