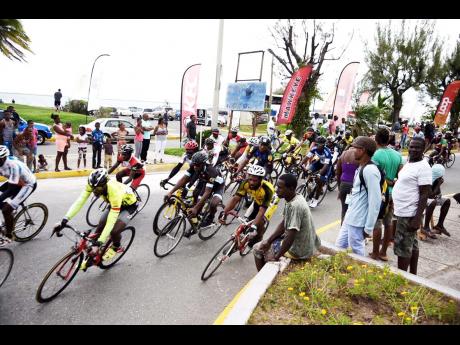 Contributed
Scenes from the Kingston Criterium in downtown Kingston yesterday. 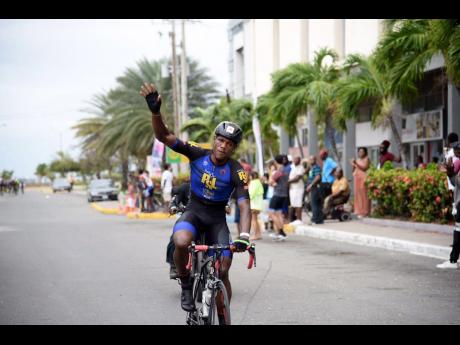 Contributed
Marloe Rodman celebrates his win in the feature 25-lap race at the Kingston Criterium in downtown Kingston yesterday.
1
2

Defending champion and Jamaica's number one ranked cyclist, Marloe Rodman, decimated the field by at least a lap to capture the feature 25 lap race at the Kingston Criterium event in Downtown Kingston, yesterday.

The former Caribbean champion has been winning local races with relative ease, especially over the last two years, but he does not think the local competition is lacking, just that he is training and competing harder.

"I would never say it is getting easy to win locally. It is never easy, as the other guys train very hard as well, it's just that I have to push a bit harder. But it's not easy," he insisted.

Rodman, who was given an incentive of $10,000 if he could lap the entire field in 15 laps, did just that, but one competitor was able to regain his lap before the 15th was completed. However, he still received the $10,000 incentive, and he admitted that the money was a great motivation.

"Money will motivate anybody but there are some very good riders locally and I wanted to show my talent and how strong I am against the other riders. I've got talent and I executed, which shows I am on top form right now. Not to say that the rest of guys are not good competition, but I'm just putting my best out there," he reasoned.

He added that. "When I lapped the field, that was a next ten grand covered and then I went for the other five grand, I didn't get it but it (the race) was good."

Rodman, who also won the category one event, will now turn his attention to overseas, as he will travel to the USA next week to compete. "The Criterium gave me some more fitness because I am leaving in another week to go to New York to do some races over there and this just shows me where I am at to race against the guys in the US. So it was a good challenge and it showed me that I am ready. My goal is always to win, so that is what I am hoping to go there to do," he said.