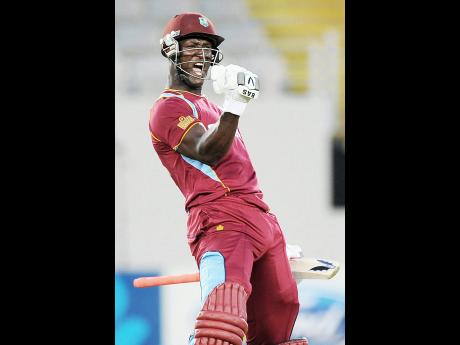 Darren Sammy said he still cares about the game in the Caribbean, but he loses little sleep about a recall to the West Indies team.

The former West Indies captain said he had little regret about publicly chiding the West Indies Cricket Board after winning last year's Twenty20 World Cup final against England, which was the final time he played for the regional side.

"It is sad that my last international was the World T20 final," Sammy told the Press Trust of India news agency. "I am still available for selection in limited overs cricket, but I am not going to cry over non-selection.

"I am still out there playing in the different leagues around the world, if selected I am available. But I am not crying over spilt milk."

The 33-year-old Sammy had modest returns in an international career for West Indies during which he played 38 Tests, 126 One-day and 66 Twenty20 Internationals between 2004 and last year.

He was however, widely praised for his passionate leadership which inspired the team to win the T20 World Cup twice (2012 and last year) and perform creditably in the other two formats of the game, even rising to fifth in the Test rankings.

But his outburst following the T20 World Cup final last year was dimly viewed by regional administrators and he subsequently lost the leadership of the T20 side to World Cup hero Carlos Brathwaite.

"What I said on the podium after winning the final, I said it from my heart," said Sammy. "I said what I had to. I expected things to happen. But I don't lose sleep over it anymore.

"God has blessed me tremendously. He is my selector. So I am not worried about what is going to happen. I still do care about West Indies cricket, but if I am not selected, I am not going to sulk over it."

Sammy is in India to as part of the Kings XI Punjab team playing in the Indian Premier League T20 tournament. It's the latest of the T20 gigs of which he has been a part, as he continues to play the game around the world.