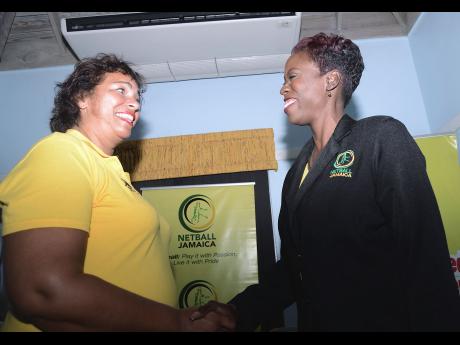 President of Netball Jamaica Paula Daley-Morris said the Sunshine Girls will be staging a number of closed-door training sessions in coming weeks as they prepare for their three-test series against Barbados later this month.

Daley-Morris made the announcement after the media was locked out of the team's training session at the National Arena last Friday afternoon.

This after the sending home three players last Wednesday for what the association describes as inappropriate behaviour.

However, Daley-Morris said the move was not unusual, and the team had a close-door training session.

"They had a closed-door training. It was not locked out," said Daley-Morris.

"They have a series coming up and she (Coach Jermaine Allison-McCracken) was working on her system. She's a new coach and she's trying to put her system in place. If the media had told us before, we would have let them in. It's a closed-door training. She doesn't need any spectators at this minute," Daley-Morris said.

COACHES FREE TO DO AS THEY WISH

She added that coaches are at liberty to have closed-door sessions whenever they want.

"If they (the media) went and they said we are working on systems and we don't want anyone in there right now, coaches can do that. The media just popped up like that. It's mischief. It's total mischief someone is making, and it needs to stop," she added.

However, Allison-McCracken said she was very surprised by the move.

"I don't know anything about it, and if that's the decision, it's not necessarily my decision. I am led by Mr (Wayne) Lewis, and if they made the decision that they don't want the press there, then that is their prerogative," said Allison-McCracken.

"This is my not area; my area is preparing the girls for competition," she said.

Lewis, who is Netball Jamaica's communications director, said he was also surprised when told of what transpired.

"I will investigate it and I will speak to the powers that be and find out exactly what transpired why that decision was made," said Lewis.

"We have no intentions of doing this because it must be a one-off situation, and I will find out exactly what transpired and motivate them to make that decision," he said.