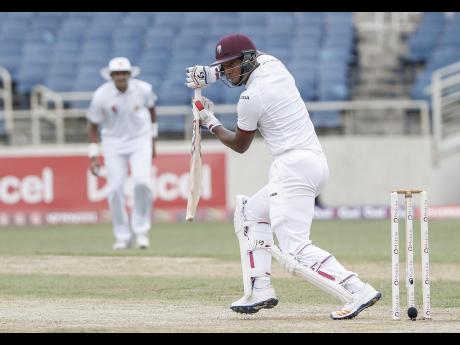 Kieran Powell during the first day of the first Test versus Pakistan at Sabina Park on April 21, 2017. WICB Media Photo/Athelstan Bellamy

The Windies are eager to prove that their stunning 107-run victory in the second Test which ended last Thursday at Kensington Oval in Barbados was no flash in the pan, as they aim to win their first Test series in four years and over a side ranked higher for the first time in eight years.

"The guys are very happy about the performance in Barbados," Powell told reporters on Sunday following a training session at the match venue.

"The bowlers have been very consistent and they have been giving us an opportunity. Now it's left for us - the batsmen - to put our hands up and put some good totals on the board, particularly in the first innings, so we can be far more competitive."

He added: "It does not happen often, so when West Indies are in town, we the fans should come out and support the team and encourage us to play some good, entertaining cricket.

"It's a Test match, so it would not be hurrah, hurrah. We expect it to be a long, hard graft over five days and we are hoping that we are the side that works harder and gets the positive result."

Powell has returned to the side for the series against the Pakistanis, starting with the preceding one-day internationals, following a three-year, self-imposed exile.

Prior his walking away, he had been clearly identified as the other half of the solution to the opening batting problem that had plagued the side.

Things have not quite worked according to plan. Though Powell had gotten starts he has failed to carry on and the problem at the top of the order has been compounded by a lack of success for the typically reliable Kraigg Brathwaite.

"Returning to the side has not been that difficult," he said. "If you take a shark out of the water and put it back in, it will swim - so I am swimming.

"There are some areas in my batting that I have identified with the batting coach that we are working on.

"The video data analyst has provided some footage and we have been examining it. I have also spoken to some people - some former players - so that I can try to rectify it for this match."