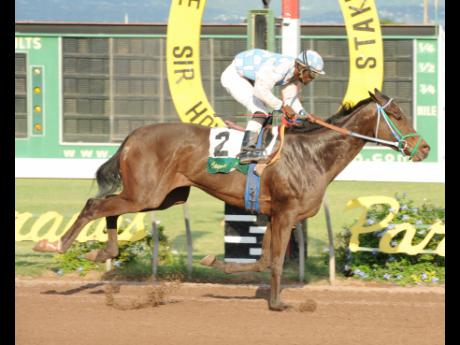 TRAINING like greased lightning, 2015 Sprint champion POKER STAR returns off an eight-month lay-up none the worse and is the firm choice in this afternoon's ninth race, an open allowance at 1100 metres.

Last raced September 16, beaten nine lengths behind BUZZ NIGHTMARE in the grade one None Such Sprint, POKER STAR returns down in class, looking every hand the horse that went on a four-race win streak from October 2015 to February 2016.

Had it not been for an unfortunate incident in which he decked jockey Robert Halledeen at the start of last year April's Lady Geeta Trophy, POKER STAR would have extended that streak to six consecutive victories, because he returned a month later to win the Lotto Sprint.

Bouncing at exercise with cheekpieces fitted for the first time, POKER STAR has been flying in the mornings. He galloped 58.1 from the gate, out the straight, a month ago and returned two weeks later to clock 1:06.1 for five-and-a-half furlongs.

As if that wasn't convincing enough, trainer Wayne DaCosta had jockey Omar Walker put him to the test a week later, 1:12.2 for six furlongs, followed by 1:06.4 for another five-and-a-half last Thursday morning.

CRUCIAL APPEAL, TALENTED TONY K and CHACE THE GREAT are all quality horses in the nine-horse field, but POKER STAR is back and looking awesome.

DaCosta's runner is actually down in class. His last seven races were all in grade one, of which he won four, decked his rider once and was not in the best of health for his two most recent outings, July and September of last year.

In July, POKER STAR went off at odds of 5-2 against stablemate SEEKING MY DREAM in the 1400-metre Eros Trophy in July but suffered a nine-length loss. It was afterwards revealed by DaCosta that his sprint star had hurt himself at the start by slamming into the gate while being loaded.

He returned in September's None Such Sprint but wasn't himself, again losing by nine lengths, beaten by BUZZ NIGHTMARE, CAMPESINO and FRANFIELD at 1200 metres.

However, after eight months off, POKER STAR seems nicely freshened for his 2017 debut, working sweetly and looking unbeatable on paper.