Battle on for cricket ball throw gold at INSPORTS Champs 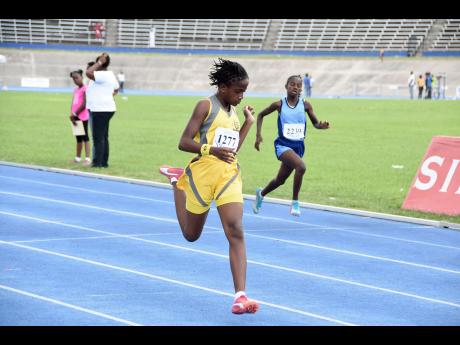 Three finals will be contested on today's second day of competition at the four-day INSPORTS Primary School Athletics Championships at the National Stadium.

The finals to be contested are the girls' high jump open, the girls' cricket ball throw and the boys' long jump open.

Harbour View's Monique Bedward is the favourite to win the cricket ball throw after she posted the leading mark of 47.81m in the preliminary round.

Janiel Mignott of Gregory Park is also one of the main contenders for the gold medal after she threw the second best mark 47.79m.

Floyd Coke, coach of defending champions Naggo Head, is confident they will retain their title.

"We are confident and we are always confident about our chances," said Coke.

Coke added: "We have areas that we are weak in, but the team is a balanced one."

Despite being high on confidence, Coke noted that he is expecting good competition from all the other schools.

"I think that all the other schools have a lot of talent and they also have good coaches. The coaches are all working hard and so we are looking for challenges from everybody," Coke stated.