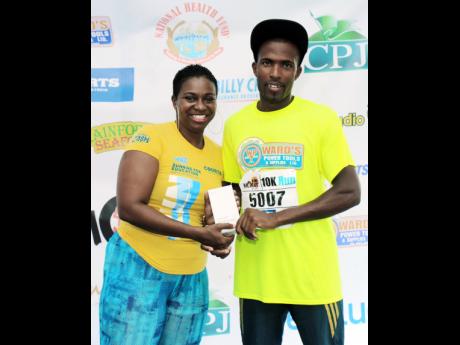 When the dust finally settled at the fourth staging of the MoBay City Run on Sunday, Kirk Brown, representing Wards Power Tools copped the men's 10K, while his teammate, Dwayne Graham, captured the 5K crown.

Dinnal and her counterparts took home several prizes including JetBlue Airways Travel certificates to any destination out of Jamaica.

The winners outpaced more than 3,600 runners and walkers who descended on the streets of Montego Bay, Sunday, May 7 for the increasingly popular event.

The charity event, which provides scholarships for needy tertiary students across western Jamaica and, for the first time, included a 3K section for children 12 years and under, officially kicked off at approximately 6:10 a.m. from the Old Hospital Park, Gloucester Avenue (Hip Strip).

Mayor of Montego Bay Homer Davis, who was also among the participants, said he was pleased with the turnout and that an event such as the MoBay City Run was a welcome respite from some of the problems that have been plaguing the tourism capital.

"Almost every sector in the Montego Bay business community was represented here today, which by no means is an easy feat to pull off," Mayor Davis remarked.

Again, RIU Resorts, with over 559 participants from their six resorts on the island, walked away with the top Corporate Challenge prize, with Scotiabank and Itel BPO, placing second and third respectively.

Platinum sponsors Unicomer Jamaica (trading as Courts) said the organisers must be "warmly congratulated" for orchestrating yet another successful staging.

According to brand manager, Jacqueline Edwards-Locke, "Unicomer Jamaica prides itself on supporting education which is evidenced by the 30-year commitment that Courts has made by awarding a total of 1,510 scholarships of excellence to date.