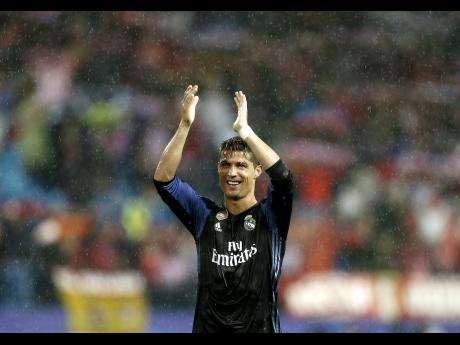 Defending champion Real Madrid withstood an early onslaught by Atletico Madrid to reach a third Champions League final in four years despite a 2-1 loss to their city rivals yesterday.

Atletico, who trailed 3-0 after the first leg, scored twice in the first 16 minutes at the Vicente Calderon Stadium to move within a goal of sending the semi-final, second-leg into extra time. But Francisco "Isco" Alarcon netted a crucial away goal for Real Madrid before halftime to secure a 4-2 victory on aggregate and a spot in the final against Juventus on June 3 in Cardiff.

Atletico end their Champions League campaign without a shot at the title and with their fourth straight elimination by their powerful Spanish rivals. Madrid defeated Atletico in the final last year and in 2014, and also eliminated the crosstown opponents in the quarterfinals in 2015.

Atletico kept their hopes alive yesterday by scoring two early goals to ignite the crowd at the packed Calderon.

Saul Niguez netted the first goal with a header off a corner in the 12th minute, and Antoine Griezmann added to the lead four minutes later by converting a penalty after Fernando Torres was tripped by defender Raphael Varane.