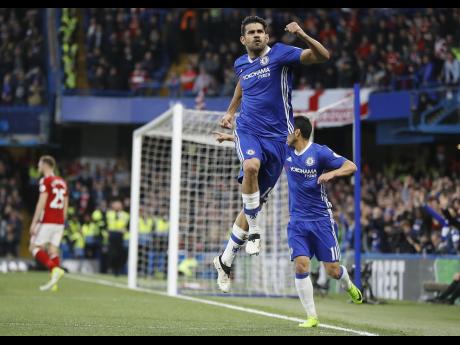 AP
Chelsea's Diego Costa celebrates scoring a goal during the English Premier League match between Chelsea and Middlesbrough at Stamford Bridge stadium in London, on Monday, May 8.

Chelsea's first opportunity to clinch the trophy comes at West Bromwich Albion tonight. If Chelsea fail to win, Tottenham - seven points behind in second place - must beat Manchester United on Sunday to keep the race alive.

Chelsea's other two matches are at home to Watford and Sunderland.

The relegation battle could also be settled this weekend, with third-to-last Hull in danger of going down along with already-demoted Middlesbrough and Sunderland.

Hull are one point behind Swansea. If Swansea beat Sunderland tomorrow, Hull must defeat Crystal Palace away on Sunday to take the relegation fight to the final weekend.

Juventus can take the first step towards a treble when they visit Roma on Sunday.

A draw at the capital side would be enough to hand Juventus an unprecedented sixth successive Serie A crown, with two matches to spare.

Defeat would leave them four points ahead of second-placed Roma and five ahead of Napoli if the latter win at Torino.

If Juventus fail in the capital, they are likely to secure the title next weekend, at home to relegation-threatened Crotone.

Between those two matches, they face Lazio in the Italian Cup final on Wednesday. Juventus then play Real Madrid in the Champions League final on June 3.

Elsewhere, AC Milan are still looking for their first win under their new owners and travel to Atalanta, while Inter Milan host Sassuolo in their first match since sacking coach Stefano Pioli. Youth team coach Stefano Vecchi will be in charge.

Real Madrid have their toughest remaining challenge in the title race on Sunday when they host fourth-placed Sevilla in their final league game at home this season.

Madrid need a victory to keep their fate in their own hands as the side bids for its first title since 2012.

Madrid and Barcelona are level on points atop the standings, with Barcelona ahead on the head-to-head tiebreaker. But Madrid still have three games to play, while Barcelona have two.

Barcelona visit Las Palmas at the same time on Sunday.

Barcelona's last game is at home against mid-table Eibar, while Madrid have games at Celta Vigo and Malaga.

Sevilla need at least a draw in their final two matches to secure fourth place and a qualification spot for the Champions League.

ON THIS WEEKEND IN EPL