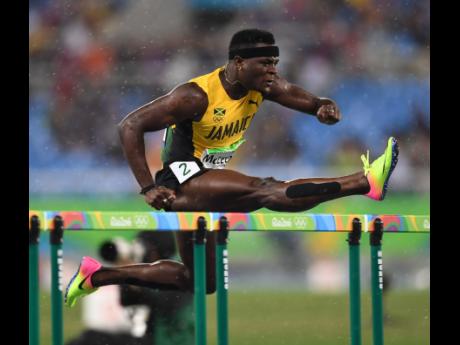 Raymond Graham (RG): Fans are in for something special in the men's 110m hurdles as, despite it being May, this is definitely a preview of what's to come at the World Championships, as the best sprint hurdlers in the world will line up at the start in Shanghai tomorrow.

AndrÈ Lowe (AL): The 110m hurdles always delivers exciting action, and with many of the big names turning up in Shanghai, another fast time is promised on a track known to produce impressive times.

RG: Omar McLeod will remember a year ago at the same venue, where he posted a world-leading 12.98 seconds to defeat his countryman, Hansle Parchment, but this time around, he will have a handful. Parchment will be back, but McLeod's biggest challenge will come from Orlando Ortega, David Oliver, Aries Merritt and Sergey Shubenkov, who is back after a year out of competition.

AL: It will be interesting to see what Shubenkov does here against a top field. McLeod was excellent at the Drake Relays in truly miserable conditions, and the Olympic champion already looks unstoppable. Despite the quality he has to face, he knows that he's the man. They know it, too. He's going to be hard to beat here.

RG: Yes, I also thought that he was unstoppable last year, but in Lausanne, he ran into Ortega, who defeated him, and the Spanish athlete is no chicken. Remember, he was top of the world in 2015, when he had a world best of 12.94 seconds in Paris.

Parchment had that injury issue ahead of the Olympics. This is a good test for him to gauge where he is. A positive result here and he will be back in the conversation.

RG: And why are we ignoring the American duo of Oliver and Merritt? Remember both have big titles in the past. While I think McLeod is the man to beat, I am not going all out on this as Shubenkov, the defending World champion, is hungry and will want to make a mark as he aims to defend his title in London this summer.

AL: I'm not ignoring them. I see them bright and clear - running for second place. Given his dominance in the event, the others will have to convince me that they can beat McLeod. His raw speed and the suggestion that he has adjusted flawlessly to his new seven-step approach means more fluidity and more bad news for his rivals. McLeod for the win, Merritt second. Third place, who knows?

RG: McLeod is, no doubt, the fastest in the field. He should lead early, and once he negotiates the obstacles well, he will be hard to overtake. With the expected competition, a sub-13 seconds is in store once again.