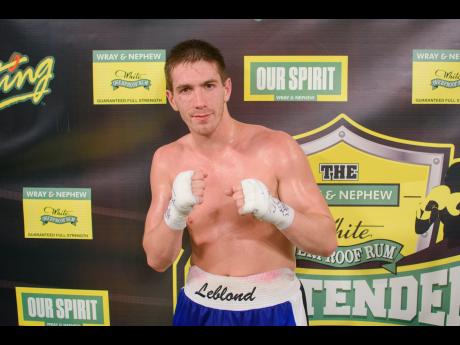 "It was not pretty, but we won and will move on to the next round," said a happy trainer, Patrice Trudeau, on Wednesday night at the Chinese Benevolent Association auditorium, after his boxer, Canada's Dave Leblond, won by a majority decision over Jamaica's Nico Yeyo to earn a place in the second round of the Wray and Nephew 2017 junior middleweight competition.

In a contest that saw a lot of holding by both boxers, and for which they were both penalised by referee Owen Nelson, Leblond had the edge and was ahead on two of the judge's scorecards at the end. Judge Lindell Allen from Jamaica

On April 19, Leblond was defeated by Jamaican Tsetsi Davis in the third week of competition in a very close fight. Leblond appealed the decision, but it was thrown out by the Jamaica Boxing Board. His Canadian colleague, Ryan Wagner, who should have fought Yeyo last Wednesday, did not pass his medical examination, however, and looking for a substitute for him, the promoters gave Leblond the nod.

Leblond grasped the opportunity and dug deep to fight off Yeyo, who was making his professional debut and came away with the victory.

Yeyo's unpredictability came to the fore on Wednesday. He is a mercurial fighter who either fights brilliantly or wildly, and he gave examples of both on Wednesday.

The contest deteriorated after the opening round as there was very little positive action and the restless crowd booed at times to show their frustration.

There was a lot of holding by both men in the final round and Leblond had one point deducted, and Yeyo, two, for this offence.

Yeyo said afterwards that in the heat of the moment, he had "deviated from the instructions given" by his corner, and his trainer, Earl Foskin, was certain that "if he had followed instructions, he would have won the fight".

Their plans fell apart, however, and Yeyo lost his first professional fight, while Leblond gets another opportunity to vie for the title and the top prize of $2 million or the runner-up prize of $500,000, third prize of $250,000, or fourth $200,000.

In amateur action, it was also Jamaica versus Canada. In the first bout, Canadian Joshua Frazer defeated Damion Williams from the Jamaica Defence Force on points, while in the second bout, Jamaica's Janathan Hanson had a split-decision victory over Canadian Jake Daoust.