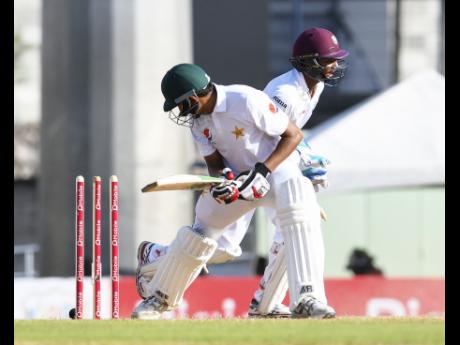 WICB Media/Randy Brooks
Pakistan's Mohammad Abbas is stumped by Shane Dowrich during the second day of the third and final Test of the Brighto Paints Q Mobile Series between West Indies and Pakistan at Windsor Park, Roseau, Dominica, yesterday.

The Caribbean side were forced to toil on a lifeless pitch but did so manfully to dismiss Pakistan in their first innings for 376, an hour before the close.

Azhar, starting the day unbeaten on 85, carved out 127 - his second successive hundred following his 105 in the first innings of the Barbados Test last week.

Captain Misbah-ul-Haq struck 59 playing in his final Test while wicketkeeper Sarfraz Ahmed produced a breezy 51 down the order.

Part-time off-spinner Roston Chase was the best bowler with four for 103 while captain and seamer Jason Holder claimed three for 71 and leg-spinner Devendra Bishoo, two for 61.

Left to navigate eleven tricky overs at the end, West Indies openers Kieran Powell (9 not out) and Kraigg Brathwaite (5 not out) endured little horrors to reach the close unscathed on 14 without loss.

The Caribbean side trail Pakistan by 362 runs heading into the pivotal day three of the match.

Resuming the day on 169 for two, the visitors inched their way painfully through an extended opening session, adding a mere 58 runs from 30 overs sent down.

The lone casualty of the morning was veteran outstanding right-hander Younis Khan, like Misbah in his final Test of a glittering career, fell leg before wicket to Holder 45 minutes into the day after adding just eight to his overnight 10.

Azhar, however, reached his century an hour before lunch when he turned Holder to fine leg for a couple of and was unbeaten on 122 at the interval with Pakistan crawling to 227 for three.