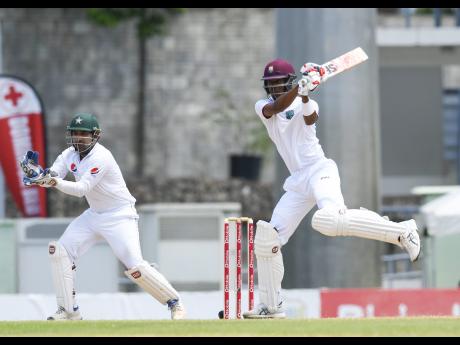 Randy R Brooks
Roston Chase plays a shot through the cover during the third day of the third and final Test match of the Brighto Paints presents Q Mobile Test Series between West Indies and Pakistan at Windsor Park, Roseau, Dominica yesterday.

Roston Chase extended his rich vein of form with a half-century, but West Indies squandered opportunities to put the squeeze on Pakistan on the third day of the decisive third Test at Windsor Park yesterday.

Replying to Pakistan's first innings of 376, West Indies closed on 218 for five, still requiring a further 158 runs to overhaul their target.

The right-handed Chase was at the centre of the Windies effort, carving out a fluent 60 before being forced to retire hurt when he was struck on the right hand by a delivery from pacer Mohammad Amir, in the second over, following the final drinks break of the day.

Chase, who gathered a half century in the Sabina Park first Test and a hundred in the second Test in Barbados, has so far faced 129 deliveries and counted five boundaries.

He got support from left-handed opener Kieran Powell, who once again got a start, but failed to carry on with 31, while Kraigg Brathwaite and Shai Hope chipped in with 29 apiece.

Resuming the day on 14 without loss, the hosts made good progress, with Powell and Brathwaite adding 43 for the first wicket to see the hosts safely through the first hour.

Powell, on nine at the start, struck two fours in an innings lasting 82 deliveries before becoming the first casualty of the day, caught at wide mid-on playing a loose stroke at Yasir in the third over after the first drinks break.

Shimron Hetmyer, in his third Test at 20, swept Yasir for four and then pulled him for six in successive overs to race to 17 off 18 balls, but was adjudged caught at the wicket on review after gaining favour with the initial decision.

Brathwaite and Hope then steadied the innings in a 28-run stand which appeared to be taking West Indies to the safety of lunch when Yasir struck a telling blow in the final over before the interval, getting Brathwaite to edge a defensive prod to wicketkeeper Sarfraz Ahmed.

On 97 for three at the break, West Indies flourished afterwards as Chase and Hope put Pakistan on the back foot with an enterprising 55-run fourth wicket partnership.

With the partnership growing and tea approaching, West Indies conceded their momentum when Hope perished to the last ball before the break, driving slow bowler Azhar Ali to Misbah-ul-Haq at extra cover at 152 for four.