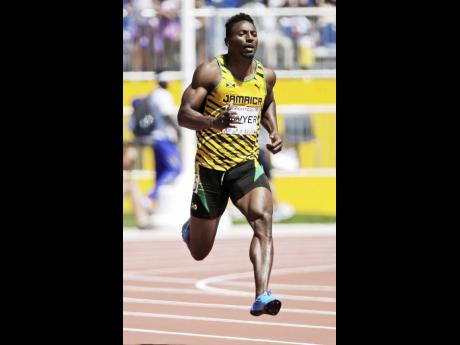 Several of the country's top senior athletes will be on show at next Saturday's Jamaica International Invitational (JII) Meet to be held inside the National Stadium.

The meet, which is classified as an IAAF World Challenge event, will also see a host of international athletes led by the likes of LaShawn Merritt and Allison Felix from the United States, as well as Canada's Andre De Grasse competing.

One Jamaican who is looking forward to getting in on the action and making a mark at the event is Sprintec's Rasheed Dwyer, the 2014 Commonwealth Games 200m gold medallist. Dwyer, who finished a close third last year behind Asafa Powell and the United States' Bejee Lee in the half-lap event is confident of doing something special, and after his season was stalled by injury later on in 2016, Dwyer is fully focused on doing well this year.

"I am definitely looking forward to doing well at the JII meet as my preparation so far this season has been going very well and there has been no injury concern, and I really want to remain injury-free for the remainder of the season. Despite the National Senior Championships being my focus first I expect to do well at this meet next week," said Dwyer, who is not worried about the times he runs at this stage.

"My main focus is to go out there and execute well, and once I do that, then something good can happen," he continued.

"This season I have recorded a personal best over the 400 metres, where I have done 46.66 and 46.44 seconds, and this tells me that my speed endurance is going well, and to follow up that, I ran 20.21 seconds recently in the 200 metres at the All Commers meet despite a positive 2.1 metres per second wind," he said.

"Things didn't go as planned last year as I missed out on the Olympic team, but this year, it will be the World Championships, and I want to be on the team and I am taking it step by step as I just want to remain humble and follow the instructions of my coach. I am excited to be competing once again in a high-quality field next Saturday, and I just want to tell my supporters to just come out and give Rasheed their support as next week could be the start of great things for the remainder of the season," Dwyer added.

He will come up against Olympic silver medal winner De Grasse and Merritt, as well as Zharnel Hughes, Nickel Ashmead, and Alonso Edwards in a world-class field.