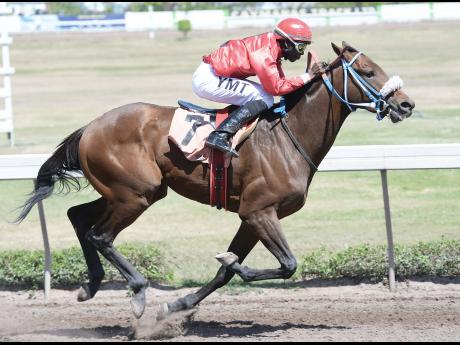 IAN LINKS has been presented with a sitter in this afternoon's Reynold 'Ren' Gonzalves Memorial at 2000 metres, facing five rivals, three of whom he has consistently had behind him in his last four starts.

The four-year-old colt not only has form to his advantage, he is the youngest in the line-up and the handicaps make him possibly the lightest in the field, coming in at approximately 49.0 kilos with two-claiming apprentice Jerome Innis.

Forget IAN LINKS' stablemate, ALSO CORRECT. The six-year-old mare returned from an unsuccessful stint at the breeding shed on March 4, a two-year lay-up, and has had the ambulance for company in four races since.

Anthony Nunes' BALLON D'OR might have won by 15 lengths on April 26 but could hardly have helped doing so in a seven-horse field of five-year-olds and upwards, non-winners of four races.

Going up against IAN LINKS, who has not been worse than third in five consecutive overnight allowance races since February, should expose BALLON D'OR's 15-length win for what it's worth - a facile victory against lower-class horses.

Since stepping up to overnight allowance in January, IANLINKS had two close calls in February. First he was beaten a length-and-a-quarter by out-of-class stablemate HOVER CRAFT at eight and a half furlongs before falling victim to another seasoned runner, TIME FOR ARMS, at a mile.

In his last three races, he was third, outclassed by winners such as ANOTHER BULLET, UPPA TUNE and SUPERLUMINAL.

In all three races, he was ridden by Omar Walker, carrying 117lb. Trainer Wayne DaCosta has asked the champion jockey to make way for Innis, a featherweight 49.0 kilos, making IAN LINKS the banker of the day.