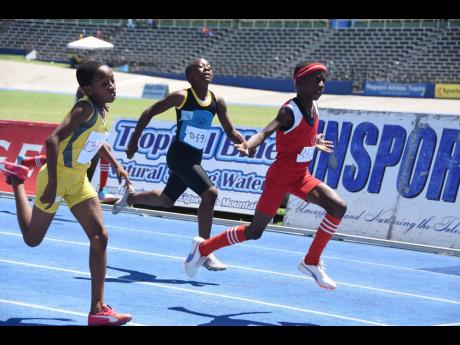 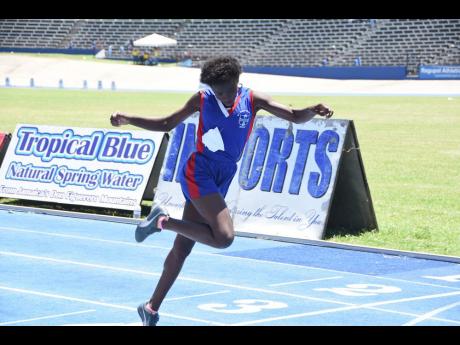 Asanneya Tomlin of St John’s crosses the line ahead of the field in the Class One girls’ 200m final at the 37th INSPORTS Primary School Athletics Championships at the National Stadium yesterday.
1
2

The Floyd Coke-coached Naggo Head Primary, who are seeking their third straight hold on the title, lead the standings with 63 points. They are followed by St John's (30 points), Harbour View, Greater Portmore and Spanish Town on 29 points each, Portsmouth (28), Lyssons and Belmont Park (27 each), Excelsior (26) and St Patrick's (20).

Coke said he very optimistic that they are going to retain their title today.

"We are confident that we will retain our title," said Coke. "Things have gone well so far for us, but in every championship, you are going to have mishaps, and we have had our fair share, but we are very strong on the track, and we will feature in most, if not all the finals tomorrow (today)," Coke said.

Marvin Patterson of Portsmouth captured the boys Class Two 200m in 26.06 ahead of Belmont Park's Ra-John Gray, 26.07 and Oshane Tucker from Sargeantville, 26.60, while Lyssons' Quana Walker sped away to win the gold Class Two equivalent in 27.10. St Richard's Chennel Thompson was second in 27.71 ahead of Jadeann Dawkins of Ewarton, 27.71.

Anthony Willis from St Patrick won the boys' high jump with a leap of 1.55m. Adrian Rumble from Rousseau was second with a mark of 1.54m, while Excelsior's Nicholas Williams finished third with a leap of 1.40m.