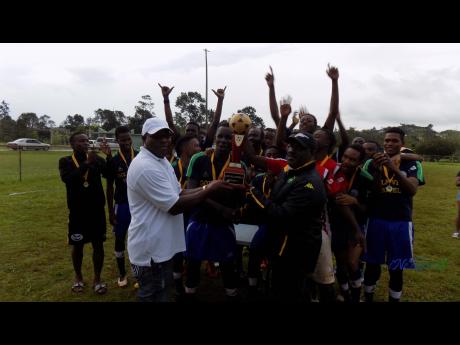 Manchester FA President Dalton Wint (right) shares the celebratory moment with members of the Los Perfectos team after they won qualification to the Manchester Major League following a 3-0 win over Old England in the Jamalco sponsored Manchester Division One competition.

Downs, Ricam and Mile Gully have all secured berths to the knockout phase of the Moorlands Development sponsored Pat Anderson Under 17 competition. All three lead their respective preliminary zones.

Ricam lead Zone One unbeaten with fifteen points from five games and are almost certain to be joined by Porus, who have twelve points but have lost once.

Mile Gully are also unbeaten in Zone Two with fifteen points from five games with the nearest challenger being YFA Academy on nine points and Hillstars on six.

Downs rule the roost in Zone Six with six wins and have the best overall average in the competition. There is also a ding dong battle in this group between Belair and Cross Keys who both have eleven points. However with the competition rules providing berths for two best third place teams overall, both could qualify.

Victory was sealed last weekend at Brooks Park, home of their 1980s and 90s heydays when they even competed in the National Premier League.

Following repeated failures since the 1990s to get back in the Premier League, the club took a 10 year hiatus from league football forcing them to make the hard road back by competing in the second tier Division One.

Los "P's" victory was set up by Christopher Campbell's two first half goals, which gave them a halftime cushion of 2-0 before Roy Dean made it totally safe late in the game.

Former champions Tafari Lions and Real Treasure Beach FC will contest the final of the St. Elizabeth FA Magnum Major League. Play is set for tomorrow at the St Elizabeth Technical High School field in Santa Cruz starting at 3:00 p.m. Time will be allowed for extra time and penalties if an advantage cannot be gained during regulation time.

Tafari Lions secured their place in the final in dramatic fashion winning 8-7 on penalties after a pulsating regulation and extra time battle with New Holland.

New Holland actually won the game 4-3 but Tafari Lions were saved by the tie of Romario Brown's first leg goal, which had given them a 1-0 result, the previous weekend at the same venue.

Real Treasure Beach had no such jitters except for the first half, which ended 0-0, as they found two goals in the second half courtesy of Junior Edwards in 67th minute and Anfernee Stewart in the 83rd.

The first night shooting match on the Manchester Rifle and Pistol Club's (MRPC) 2017 calendar was completed without incident last weekend at its Lincoln range, providing competitors and fans with a lot of excitement.

When the dust was settled Orville Henriques came out on top with Lasbury Larmond second, Ronald Robertson in third place and Michael Bradshaw and Desmond Prince completing the top five. A whopping 22 shooters competed in the three hour affair, which lasted up to 11:00 p.m. The match featured five stages for all of 60 live rounds. The MRPC also issued a special thanks to members of the Jamaica Defence Force, who also participated in the match.

The club also released that due to popular demand of its patrons, the Spray as You May Match, scheduled for Sunday, May 21 which was previously advertised as a 130 round match will be held as a 90 round match.

Goals galore in Manchester U15

There were goals galore on the opening day of the Manchester Football Association's Under 15 competition at the Kirkvine Sports Complex.

Belair highlighted the scoring on the day with a 10-0 win over debutante Hope Village. Tahj Thompson preened himself knocking in four goals while Shemar Palmer netted a hatrick. Ricam Academy also showed Cross Keys no mercy slamming them 6-0 with Nicari Campbell getting a hatrick. Comfort were also unsettled 5-1 by Villa United whose Rohane Brown scored twice. In the last of the routs, May Day disposed of Porus 4-1.

In the two more even contests, Alligator Pond and Starz Academy ended 0-0, while Mile Gully rallied from behind to outscore Star Zone Academy 3-2.