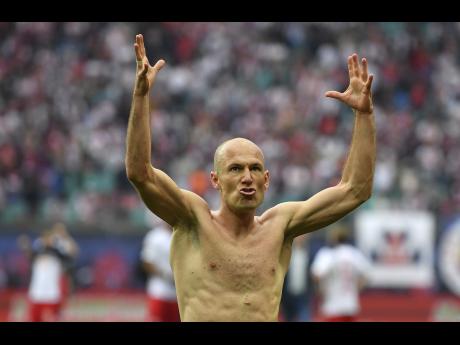 
BERLIN (AP) — Arjen Robben scored in the fifth minute of injury time for Bundesliga champion Bayern Munich to come back from two goals down and beat Leipzig 5-4 yesterday.

"It was a crazy game," said Bayern coach Carlo Ancelotti, whose side wrapped up the title two weeks ago.

Ingolstadt, who drew at Freiburg 1-1, were relegated in dramatic fashion as Sead Kolasinac's apparent injury-time winner for Schalke against relegation rivals Hamburger SV was ruled out, leaving Ingolstadt four points adrift of Hamburg with one round left.

Hamburg gained a point thanks to Pierre-Michel Lasogga's goal in the second minute of injury time for 1-1. They remained in the relegation playoff spot ahead of a decisive game against Wolfsburg on the final day of the season.

"We have to seal the deal against Wolfsburg next Saturday," Hamburg coach Markus Gisdol said.

Bayer Leverkusen are effectively safe after its drawing with Cologne 2-2 in the Rhine derby.

Bayern got off to a bad start at second-placed Leipzig when Marcel Sabitzer opened the scoring in the second minute.

Robert Lewandowski equalised from the penalty spot for his 150th Bundesliga goal.

Timo Werner restored the home side's lead with another penalty after Xabi Alonso brought down Emil Forsberg, and it got worse for the champions when Forsberg set up Yussuf Poulsen to make it 3-1 after the break.