Giroud at the double for Arsenal 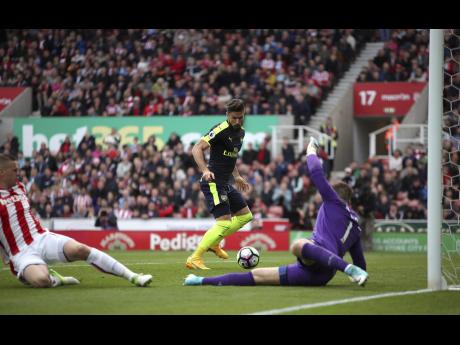 Mesut Ozil grabbed the other goal for Arsenal, whose swagger is returning as they attempt to hunt down Liverpool and Manchester City for a top-four finish. Arsenal stayed fifth but climbed to within one point of fourth-placed Liverpool and three of third-placed City with two matches remaining.

Only last month, Arsenal's Champions League dream looked over after a demoralising 3-0 loss at Crystal Palace, which sparked angry protests from fans against manager Arsene Wenger. Since then, however, the team has won five of six league games in what has become a familiar late-season charge.

In the last five years, no Premier League team has a better record in April and May than Arsenal.

Giroud got the nod ahead of Danny Welbeck as the starting striker for a fixture in which Arsenal have struggled in recent years, and responded with close-range goals in either half to bookend an impressive display from the visitors.

Giroud tapped home Hector Bellerin's cross in the 42nd minute to put Arsenal ahead, and slid in to convert substitute Aaron Ramsey's low centre in the 80th.

In between, Sanchez slid in a brilliant through-ball for Ozil to take a touch and finish well in the 55th.

Sanchez scored himself in the 76th - moments after signalling to come off with an apparent left thigh injury - when he burst into the area and fired in a shot that deflected in off the post.