Sunshine Girl channels her energy into netball after losing her mother 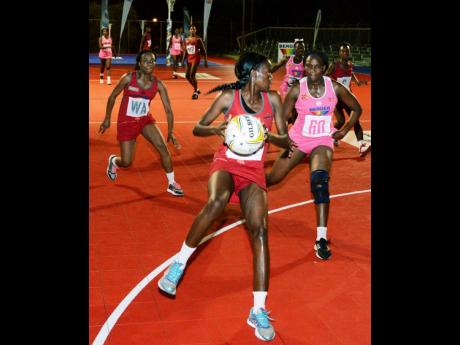 Netball has never been more important to Melissa Wright.

The 24-year-old Sunshine Girl is on the rebound after losing her beloved mother recently. Now, she is channelling all her energy into the game that has brought her much joy, as the Jamaicans prepare to face Barbados in a three-Test series, May 19-22.

"I'm very motivated at this time. I've a lot of hard-working girls around me. We tend to motivate each other, so that's where I get my motivation from and the death of my mom," admitted Wright.

"I lost my mom in January, so I'm intrinsically motivated ... to show Jamaica that, once more, I can represent the country," she added.

"I've been affected emotionally, socially, mentally, so I'm just doing netball to ease my mind and get myself physically and mentally ready again for life's tasks. Netball is something that you have to be disciplined about, so that's something you can take over into life as well."

A versatile campaigner, the five-foot, eight-inch Wright plays either the centre, wing attack or wing defence positions. She represents local club Windalco, the sister club of Jamalco, and also the Kingston Hummingbirds in the Berger Elite League.

She was a member of the Under-21 Jamaica team that secured the bronze medal at the World Youth Netball Championships in Glasgow, Scotland,in 2013 and relishes the chance of stepping up to the senior level.

"It would be greatly appreciated to represent my country once again since I represented in 2013 in Glasgow, Scotland, where we retrieved our third place, the bronze medal," she said.

"The training is getting there and, hopefully, by doing the right training, we should be successful in my first series with the senior squad."

Wright, a telemarketer, has a degree in sports psychology, which she attained at the University of Technology.

She notes a newness in training methods at this level, where, coincidentally, the team also has a new coach in Jermaine Allison-McCracken.

"It's a different routine from what we were used to doing in Under-21. I'm not sure about the senior girls because this is my first year back with the Sunshine Girls, so I'm just working hard to ensure that I complete the task that is given by the coach at any point in time and make sure that I achieve individual targets that are set out," observed Wright.

Looking to the Barbados matches, she expects the fourth-ranked Sunshine Girls to give superior performances.

"We will be successful if we put our minds to it and work together and bring it home as a team," she said.