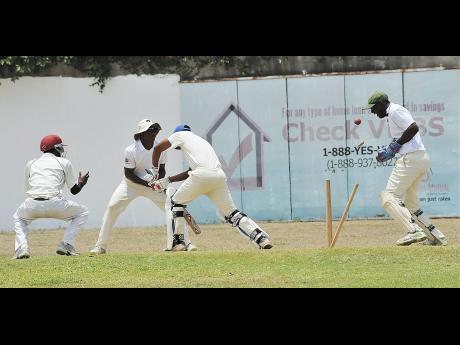 The 2017 Senior Cup cricket season is again upon us, but despite the talk of the need to improve the game, to start the competition earlier, to play more cricket, and, hopefully, to get better cricket, it is the same old story.

It is the same teams, the same number of teams, including weak teams, and a few matches for the season. There is only one thing new, and that one thing is that there will be no "trial" matches.

There is also the problem of a late withdrawal of two teams in protest against what the protesters claim is a breach of promise.

MEDDLING WITH THE GAME

It is similar to the attempts by previous administrators to meddle with the game by interfering with the orderly and its peaceful running by introducing things such as the "bowl off" of years ago when there was no winner in a game, the idea of the winners during the preliminary round of the competition going through to the semi-final some time ago, the last team dropping out, and the other six playing off for the three places to meet the preliminary-round winners in the semi-finals.

I remember that Melbourne, which figured they could never finish last, allowed a couple of their players to go to the United States to play a few games, finished in the middle of the table, and when the players returned home, went on to win the Senior Cup.

I remember also that once there was bonus points, and on one occasion when one team defeated another by an innings and runs early on the second day of play, they got less points than another team which won their match by a few runs late on that same second day.

First off, the "trial" matches have always been a waste of time. After playing a "full" season of competitive club matches, as they were in the old days, in different conditions and pitches, "trial" matches were nothing but glorified practice sessions, especially whenever "sure"-pick players tried to get their friends into the team.

The "trial" matches should have been gone a long, long time ago, and especially when Jamaica's cricket, as one competition, became islandwide in 1990.

The grouping of the clubs and parishes into teams has also been tried before, certainly in the forms of Kingston East and Kingston West, South Zone, Mid Island, and West Zone. Thank God, those are behind us.

Those teams have no common ground, nowhere to meet and to train, and after a while, they usually turn up short of a player or two.

Clubs are the salvation of sports; they are the life of cricket. It has been so for a long time, and it will remain so for some time. Clubs and communities, like states and provinces, are the welfare of sports generally and cricket particularly.

What Jamaica needs is a club/parish system, and a system with a limited number of clubs, because of its size, but with participation open to all cricketers good enough to be developed into good cricketers to entertain the population and to properly represent the country.

It does not need a "franchise"-style system, especially when the quality of play is so weak that nobody will sponsor it and the Jamaica Cricket Association (JCA), with hardly any money, will have to underwrite it.

The bad start to the competition saw St Thomas and Kensington pulling out in protest, and their protest follow a grouse with the way the competition is being played this time around.

They also stated that the clubs later got a letter from the JCA saying that the competition was put off until 2017 as the clubs said they were not prepared for the change.

The idea was that the top-eight teams would play in the top tier and the others in the bottom tier in a promotion and relegation system, system which, however, was tried in the 1990s.

It is also a system, or one near to it, that members of the cricket association have been talking about for a long time, but due to the fear of some clubs/parishes that they would not be included in the shake-up, and, probably, fearful of losing their support, because of that, the JCA has been marking time.

Those protesting the state of things claim that on March 4 last year, the JCA wrote and informed the clubs of the change in the competition.

They further state that the JCA had no right in calling a meeting, listening to the meeting, and then when the meeting gave its take on how the competition should be run, the JCA went and did its own thing without even communicating with its members.

The people involved claim that except for one terse "one-line" letter, they received no communication on the matter before the fixtures were released.

It is difficult to say who is telling the truth, but one thing should be clear: if the JCA did call a meeting on the issue, any meeting involving its members, and if the meeting did decide on the way forward, the JCA had no right to ignore their wishes, or their decision, at least, not without calling another meeting.